A woman in The Villages was caught cruising a golf cart on the street Sunday. She was spotted at the intersection of County Road 466A and Buena Vista Blvd., just outside the Sandhill Executive Golf Course.

Villages-News reported the woman apparently made a mistake, quickly hopping back on the cart path that runs next to County Road 466A.

The Villages woman didn't appear to be intentionally taking her cart on the street the way of another recent golf cart driver, who casually took the definitely-not-street-legal ride across County Road 466 from the Colony Plaza shopping center to the Colony Professional Plaza.

As far as elderly, zero-Fs-to-give swag goes, whippin' a golf cart off the course and across the street is way up there. It sounds like the opening scene to a granny-rap music video. 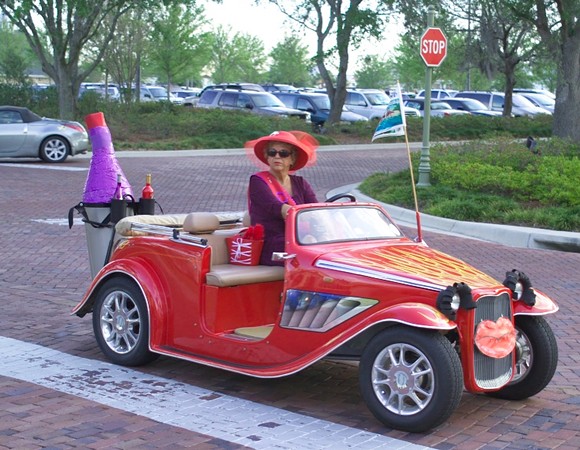 Florida has more elderly drivers than any other state in the country, including both permanent residents and snowbirds who head down to drive here every year. It's estimated that 900,000 people make the annual migration, increasing the state's population by 5 percent.

For many of the nearly one million temporary residents who can afford to flock to Florida, wintering in the Sunshine State is about soaking in rays and leisure. Migrating south, specifically to Florida, is also a favorite of retirees, prompting the Pew Research Center to call the state one of the grayest in the union.

The Villages is a favorite for richy-rich snowbirds and, for some who reside there, all the world's a country club.
Stay on top of Orlando news and views. Sign up for our weekly Headlines newsletter.