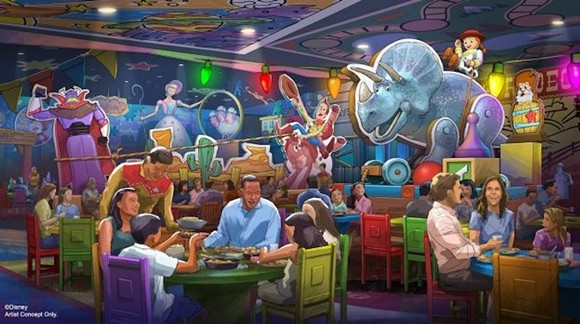 Updated, Dec. 10: A representative from Beatrix reached out and told us their Disney Springs space will be more of a full-service restaurant, and not one of their food hall-style markets.

Updated, Dec 11: City Works has confirmed to Orlando Weekly that they on track for a Q1 2020 opening and are not connected to the NBA Experience next to it.

Walt Disney World is planning for a massive influx of visitors for their 50th Anniversary in 2021, and all those guests are going to need somewhere to eat.

That means there will be plenty of new dining options opening across the resort in the coming months. Last week, during the multi-day media hype around Rise of the Resistance, Disney snuck in a surprising amount of news regarding other upcoming projects, including details on multiple upcoming restaurants.

Newly released concept art confirms that the previous Western Town design of this area has been scrapped. Instead, Disney has opted for a less detailed cardboard-box theme on the outside of the newly constructed building. The entrance will be nestled between two Tinker-toy lights, just behind the Woody figurine near the main entrance.

If Roundup Rodeo BBQ is busy, you can hop on the Skyliner and head to Epcot, where another BBQ restaurant is opening. At The American Adventure, which is typically not known for quality food, Regal Eagle Smokehouse: Craft Drafts & Barbecue will replace The Liberty Inn. The menu will celebrate various barbecue styles from across the nation, while the beer list will allow guests to try craft beers from various American breweries.

A large, centrally located outdoor meat smoker will be surrounded by picnic table seating with a walk-up ordering window. In the concept art, there appears to be an indoor seating area, as well. Regal Eagle is listed as opening this month.

Across Epcot, the highly anticipated Space 220 restaurant, attached to the Mission: Space pavilion, is scheduled to open in 2020, likely ahead of the late-spring crowds. The higher-end restaurant, which recently lost its Executive Chef to the Wynn Las Vegas, will be one of the most technologically advanced dining experiences in the world.

Guests will enter via a simulated space elevator that has screens on the floor reminiscent of Tomorrowland’s long-closed Flight to the Moon attraction. Once diners ‘arrive’ to the space restaurant, supposedly located 220 miles above Epcot, they will enter the main dining room walking past a spinning garden, the grow zone, that demonstrates a space greenhouse concept. The dining room will have massive video screens that simulate views of earth and space. Disney is expected to release more details on Space 220 in the coming weeks.

Not all the new dining will be inside the theme parks. At Disney's brand new Riviera Resort, also on the Skyliner route, the soon to open rooftop restaurant, Topolino's Terrace – Flavors of the Riviera, will provide some of the best views yet of Epcot and Hollywood Studios’ nighttime shows. Topolino’s, Mickey Mouse’s name in Italian, will offer breakfast and dinner with characters joining for breakfast and brunch. Mickey, Minnie, Donald, and Daisy will keep with the French and Italian theme of the restaurant with unique artist-inspired outfits. A pool side bar, a quick-service café, and a French bakery inspired lounge will also open with the DVC resort. All are expected to open by the end of the year.

Over at Disney Springs, attached to the struggling NBA Experience is the upcoming City Works Eatery & Pour House. With incredibly low attendance at the up-charge attraction, some have speculated that the restaurant may have been delayed while the future of the attraction is realigned. This is not accurate. The sports bar-style restaurant City Works – not to be confused with CityWalk where the former, non-related, NBA City restaurant was located – shares the building with NBA Experience that replaced Disney Quest but is a separate entity. City Works is slated to have 90 drafts and is expected to open in Q1 of 2020.

The West Side will be getting a second new restaurant in 2020, when Beatrix opens in the space where Bongo's was previously found. The new health-focused, vegetarian-friendly Beatrix is the first restaurant in Florida by Chicago-based Lettuce Entertain You Enterprises, which also has restaurants in L.A. and Las Vegas. This will be the first Beatrix outside the Chicago area. Beatrix told us their Disney Springs space will be more of a full-service restaurant, and not one of their food hall-style markets.

Disney Springs has seen incredible success with many of its restaurants. Three of the restaurants within the complex rank among the top 100 independent restaurants in the nation in sales last year with The Boathouse coming in third in the nation. The other two to make the list are Paddlefish, coming in at number 25, and Morimoto Asia, at number 57. The Boathouse also ranked fourth in the nation on the list for the number of meals served, with an estimated 831,375 served last year. These impressive numbers are why so many restauranteurs want to open up shop at Disney Springs, but for now, rumors point to Disney instead looking to fill the few remaining empty spaces left with new attractions and retail offerings.

Few details on the WDW 50th Anniversary celebration have been shared, but it is expected to last throughout 2021 and possibly into 2022. Beyond 2021, even more new restaurants are expected across WDW, with at least one sit-down restaurant coming to the new DVC resort Reflections and an upcoming bar in the works for Epcot. Details on those concepts aren’t expected until at least next year.