There are plenty of fantastic parties in the area theme parks where you can ring in the New Year, but if you’re looking for something that doesn’t require hours of sitting in traffic, listening to Brazilian soccer chants, and witnessing children have full-on meltdowns, there are plenty of other options in the tourist district. Nearly every major hotel and retail center on International Drive will have its own NYE party this year.

ICON Park will celebrate not only the countdown in Orlando but around the world, with special light shows on the Wheel every hour. At midnight, an extra-tall celebration with fireworks will ring in the new year. The event is free, but upcharge VIP tables include access to the Tattinger Bubble Room Experience and unlimited rides on the Wheel from 7 until 11 p.m.

Many of the restaurants at ICON will be hosting their own parties, with Tin Roof planning a Roaring 20s themed bash that will include a champagne toast and a ball drop. VIP tickets to that event start at $35.

King’s Bowl will host its own Roaring 20s Gatsby party with a buffet, unlimited gaming, and party favors. Tickets begin at $48 and include one specialty cocktail and a midnight toast.

The Orlando Starflyer is hosting its own NYE party with a dance party, outdoor games, and drink specials. Twenty-four lucky guests will win a flight on a unique midnight ride on the Starflyer, where they’ll be able to take in views of all the area’s fireworks, while spinning up to 60 mph at 450 feet in the air.

Sleuths Mystery Dinner Theatre will have a comedic murder mystery show, followed by a champagne toast at midnight. Tickets start at $90 and include dinner, dessert, unlimited beer and wine, and party favors.

Tapa Toro is ensuring you’ll be full before ICON’s big fireworks show, with an extra early celebration beginning at 5 p.m. that includes live Flamenco dancing. A four-course, prix fixe menu for $35, including a champagne toast at 6 p.m., will be offered. A later, five-course meal for $75 is offered for seatings after 9 p.m.

Up the street at Andretti Indoor Karting and Games, the party begins even earlier with their Noon Years Eve celebration between 10 a.m. and 2 p.m. The kid-friendly event will include a balloon drop at noon, with separate sections for kids under 8 and another for those 8 to 12 years old. Arcade games will be half-off, and there will be more than $1,000 in prizes given away during the event.

Across the parking lot at TopGolf, the party kicks off at 9 p.m., with live entertainment, party favors, and midnight fireworks show. Prices per bay, which can hold up to six guests, begin at $240 and include unlimited gameplay from 9 p.m. through 1 a.m. For $420, a VIP bay can be reserved which includes a buffet, a bottle of wine, and unlimited non-alcoholic drinks. The party goes from 9 p.m. to 2 a.m.

At Pointe Orlando, there isn’t a complex-wide party like what ICON is hosting, but instead, nearly every restaurant is hosting its own event. Taverna Opa, known for its nightly parties, is kicking it up a notch with family-style Greek appetizers, individual entrees, a dessert station, a live DJ, belly dancers, and fire shows. Tickets begin at $75.

At Cuba Libre, a buffet and live DJ will ring in the new year. For $100, diners will have access to the party and a reserved table throughout the evening. Seatings begin at 9:30 p.m. and include a champagne toast and party favors.

Pointe Orlando’s Blue Martini keeps the Roaring Twenties theme with a party that includes hors d’oeuvres, limited open bar between 8 and 10 p.m., and midnight champagne toast. Tickets are $60, but guests can save $10 by purchasing tickets online.

The Orlando Improv will have a special evening with comedian Tony Rock. After Rock's show, guests will have access to an exclusive party at Fat Fish Blue that will include a midnight toast, party favors, and, uh, strawberries. Tickets begin at $60. 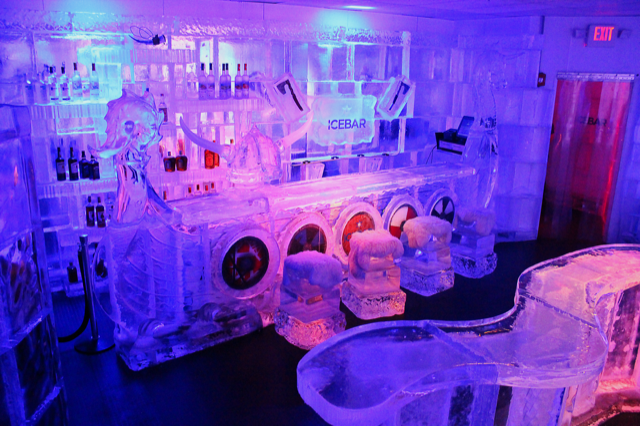 Near Pointe Orlando at ICEBAR, the party begins at 8 p.m. A midnight buffet and champagne bar are included with general admission, which starts at $50. For an extra $25, guests can have access to an open bar.

A few doors down at Howl at the Moon, the party starts an hour later, at 9 p.m. General admission starts at $20. For $65, guests can access a premium open bar begin at 9 p.m. Other options include an $80 buffet with guaranteed reserved upper deck seating and a $130 main floor seating that includes a buffet and open bar.

Mango’s Tropical Café will have a special NYE dining menu and entertainment with the party kicking off at 7:30 p.m. Tickets begin at $50, with multiple VIP options ranging in price from $175 to $275, with most including a bottle of champagne or an open bar.

There are plenty of other area parties, including ones at nearly every single hotel bar. With so many options and hotels to crash afterward, I-Drive is proving itself a worthy contender against downtown Orlando’s crazy New Year's Eve. So this year, instead of fighting for parking or surge pricing downtown, grab a hotel room on I-Drive and party like a convention goer with a no-limit business credit card.