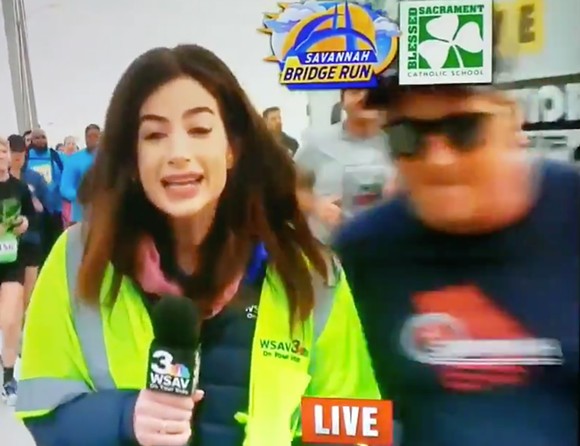 "You violated, objectified, and embarrassed me," said TV reporter Alex Bozarjian in a widely shared tweet, directed toward the man who allegedly groped her on live television.

The tweet captions a video from Bozarjian's WSAV-TV report of a 10K race in Savannah, Georgia, on Saturday. In the segment, runners stream by Bozarjian and the news camera, doing what people always do around a news camera – wave and wildly gesticulate or otherwise quickly bring attention to themselves.

Until a middle-aged-looking white man runs by and appears to lean down and smack her on her butt. The man can be seen looking down at Bozarjian's backside, slapping her and staring right into the news camera, as if the asshole couldn't help but stop and tip his cap. It's as though the predation occurred primarily because she was on TV, as though he wanted to put her in her place, and any woman watching.

To the man who smacked my butt on live TV this morning: You violated, objectified, and embarrassed me. No woman should EVER have to put up with this at work or anywhere!! Do better. https://t.co/PRLXkBY5hn

Bozarjian completely stops, all amicable vibes draining from her demeanor. She incredulously, furiously stares off-screen for just a moment in the direction of the man who had just assaulted her. Then, understandably deflated, she continues her report as a true pro, like the countless women before (and after) who take sexist shit but still get the job done.

To make things even grosser, the man identified as the groper is a father of two kids, a Boy Scout leader – and a youth minister. Worse still, the alleged assailant, Tommy Callaway, 43, denies he intentionally smacked her butt.

"I was getting ready to bring my hands up and wave to the camera to the audience, there was a misjudge in character and decision-making," Callaway told Inside Edition. "I touched her back; I did not know exactly where I touched her."

That's not what happened. Anyone with eyes who sees the video knows as much.

The Savannah Sports Council, who first identified Callaway from the video, swiftly banned him from future races.

Dear dumbass bros, please, in the words of Bozarjian: "do better."