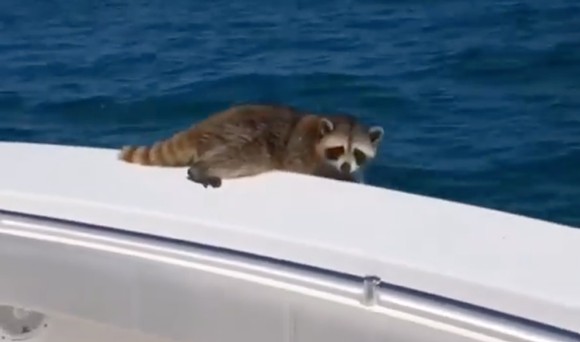 After a seven-month investigation into the Clearwater lawyer who filmed himself saying “So long, sucker” to a raccoon he left stranded 20 miles offshore, the Florida Bar suggests he take a $750 “professional workshop” to stay in good standing.

According to the Tampa Bay Times, Thomas Cope’s recommendation of diversion was issued on Monday, Dec. 16, and as long as he completes the workshop, the lawyer won’t face any disciplinary action from the Florida Bar.

Cope’s now-deleted raccoon video went viral last May, and was captioned, "Trash panda came out from hiding 20 miles from dock! Anyone else had these things squat on their boat? *watch muted if you don't like profanity.*" Throughout the video, Cope and company can be heard yelling at the raccoon, while the animal desperately searches for an escape.

“Get off my fucking boat! What the fuck is wrong with you?” a man is heard yelling in the video. “We're just going to have to push him off,” another says. Once the raccoon fell off the boat, the video then showed the animal swimming aimlessly in the ocean.

Cope has since apologized for the incident. “I sincerely wish there was some way I could have safely returned to shore to release the raccoon,” Cope said in a statement. “Knowing raccoons can be rabid and unpredictable, the only realistic option we could think of in the moment was to get the raccoon off the boat."

The Florida Fish and Wildlife Conservation Commission also investigated the case, but never filed charges because they could not establish jurisdiction.

This is just the most recent case of Florida residents filming themselves conducting animal abuse and getting off with a slap on the wrist.

Last February, the boat captain who filmed himself dragging a live shark was sentenced to a hearty 10 days in the Hillsborough County Jail, which he can do on the weekends, and 11 months of probation. He also never made a public apology.