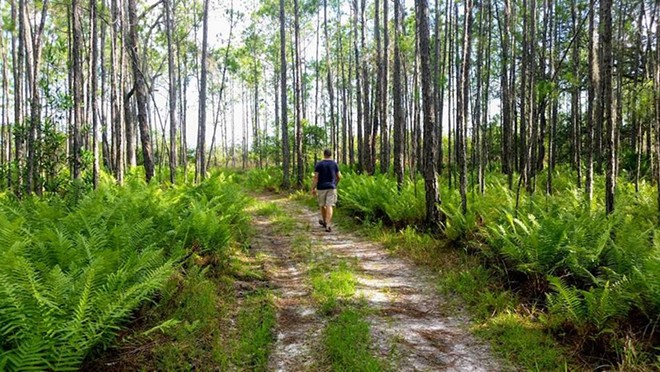 The Osceola Parkway extension got a little closer to becoming a reality, to the alarm of local environmentalists.

Osceola County Commissioners approved the extension Monday. The plan is not a done deal, but the approval by the Osceola board was another step in that direction.

The proposal, billed by proponents as an effort to ease traffic on Orlando's congested roadways, is to connect the Osceola Parkway toll road from State Road 417 to the Orlando International Airport with a nine-mile extension that cuts through the Split Oak Forest.

Laying road down one of Central Florida's most pristine forests has sparked concern from conservationists.

Split Oak Forest is owned by Osceola and Orange counties, purchased as a mitigation bank against wetland impacts. The Florida Fish and Wildlife Conservation Commission has spent over 20 years maintaining the forest, untouched by centuries of rampant development. Strictly, hiking and permit-carrying horseback riding are allowed. Hunting, camping or biking are all prohibited.

The proposal, which has been in the making for over a decade and has been tweaked to have less impact on the forest, has already been approved by the Central Florida Expressway Authority (CFX).

Opponents of the extension plan to split Split Oak packed the Osceola County Commissioners' meeting last night and spoke during the public forum, in the hopes of swaying the board from approving the plan.

Some against the extension expressed concerns that the road would lead to further development, deteriorating the conservationist wonder that is Split Oak, or that conservation land would be used for anything other than conservation. Others wondered if the plan was being hastily passed and that detractors have little recourse in stopping construction.

"In all good consciousness, I cannot move to approve such an item," said Osceola County Commissioner Peggy Choudry, the lone "no" vote. tweet this
"CFX last week, Osceola County this week, Orange County tomorrow? This is being slammed through," said one speaker. Orange County officials are indeed set to vote on the plan Tuesday, the next day.

Ultimately, the Osceola board voted to approve the extension by a vote of four-to-one. "In all good consciousness, I cannot move to approve such an item," said Osceola County Commissioner Peggy Choudry, the lone "no" vote.

"This whole process, this whole decision, has been probably been my most difficult decision as an elected official," said Commissioner Cheryl Grieb.

After being approved by CFX and Osceola County, the plan needs to be approved by Orange County, whose board meets tonight.