Orange County commissioners did not know all options available, ahead of approving $125 million for Universal 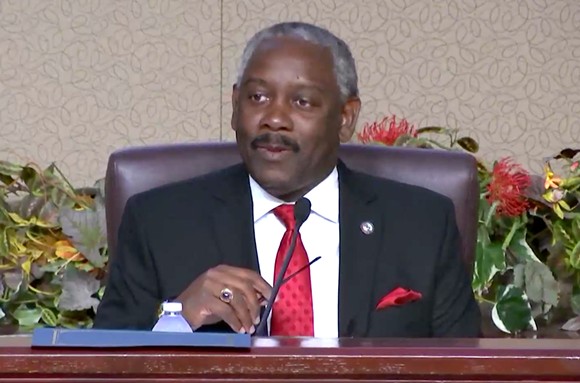 By a narrow 4-to-3 vote, Orange County commissioners approved giving Universal Orlando $125 million for a new road on Tuesday. The decision, it turns out, may have been made under false pretenses.

The funds will cover about 40 percent of a $305 million road project to extend Kirkman Road from Sand Lake Road for Universal’s new theme park, Epic Universe.

That's a lot of taxpayer money to help a massive company build a relatively small section of asphalt, of course, and just before the narrow vote, commissioners heard from people who wanted to spend the funds on things the community needs. Public commentary on the issue began at 10 p.m., part of a larger commission meeting that lasted more than 14 hours.

At the time, Orange County leaders were told they had no choice but to spend the money, taxes from a special taxing district, on transportation.

Commissioner Christine Moore asked if the money could be diverted, "right now," to fund extra hourly wages for workers or affordable housing. "No, ma'am," said Orange County’s transportation planning manager Renzo Nastasi. Moore then asked the county attorney if the money could be used at "this time" and was told "no" again.
"In this particular case, the monies that have been allocated for this are specifically earmarked for transportation and not other worthy causes," concluded Commissioner Betsy VanderLey.

Orange officials made it clear to the audience that their hands were tied, and the proposal passed by one vote. Mayor Jerry Demings was joined in his yes vote by commissioners Victoria Siplin, Moore and VanderLey. Commissioners Emily Bonilla, Maribel Gomez Cordero and Mayra Uribe voted no.

"I couldn't find a justification for giving a corporation that large and that well-funded money," said Uribe to Orlando Weekly. That's how a lot of people feel, more so after discovering the next day that the commissioners had a way to spend the funds elsewhere, after all.

On Wednesday, the county acknowledged that, though the money in the International Drive tourist corridor tax district is specifically earmarked for transportation, state law allows the county to transfer money out of the taxing district at the end of the fiscal year.

"We were not briefed on that," VanderLey said Wednesday to the Orlando Sentinel. She did add that, even if she did know, she would have voted for the deal anyway, saying it would be unfair to property owners to spend their tax money on transportation deals outside of their area.

"I do not see any losers in the actions taken yesterday by Orange County, but only winners," Demings said in a written statement on Wednesday. "Thousands of jobs will be created by the Universal expansion that will have a multibillion-dollar impact on Central Florida."