Disneyland gets new parade with Todrick Hall soundtrack, while WDW fans in Orlando beg 'Be fair to Florida!' 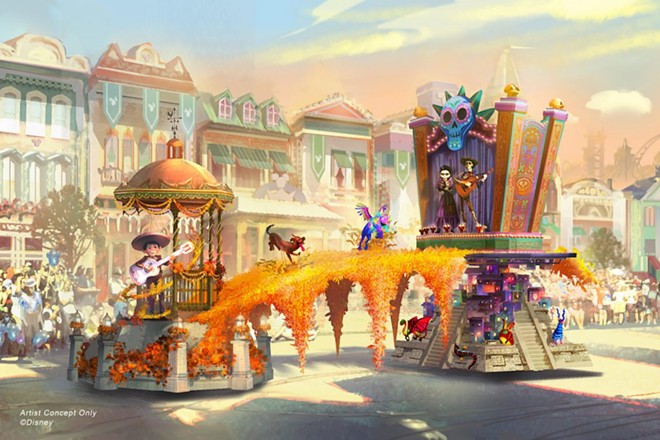 As prices continue to rise at Walt Disney World, many former fans of the resort are beginning to question if it’s still worth it, while Disneyland is showing what a Disney resort can truly be.

With prices at the parks continuing to rise, it may soon be cheaper to just fly to the parks in California. tweet this
The current parade at the Magic Kingdom, "Festival of Fantasy," debuted in 2014. The parade it replaced, "Celebrate A Dream Come True," lasted 13 years. As of now, there’s no indication that the Magic Kingdom has plans to replace the nearly six-year-old "Festival of Fantasy" parade. Meanwhile at Disneyland, they’re about to debut the brand-new "Magic Happens" parade on Feb. 28. This will be the fifth new parade for Disneyland since 2000.

"Magic Happens" will feature brand new floats, costumes, and a musical score, with two new songs by American Idol semi-finalist and YouTube sensation Todrick Hall. Known for his gay power anthems, Hall made a name for himself with his Disney-inspired music videos. Early in his career, he produced a handful of professional looking Disney spoof music videos. Within weeks of those videos going viral, Hall was working with Beyoncé and Pentatonix.

With Hall onboard, the new Disneyland parade promises to have yet another earworm that will become an instant hit for Disney. Frozen, Moana, Coco, Sleeping Beauty and other iconic Disney films will be represented in the new parade.

It’s not just new parades that Disneyland gets more often than Orlando. Since 2003, Magic Kingdom has seen only two regular firework shows. Meanwhile, Disneyland has gone through eight. On social media, there has long been - mostly in jest - calls to ‘Be fair to Florida.’ These calls aren’t strictly focused on Disney but also on Universal, who is known to provide far more updates and unique seasonal offerings at their Hollywood resort, compared to the one in Orlando. But there’s no question that Disney World is far more guilty of keeping entertainment and seasonal offerings longer than its California counterpart.

This is due, in part, to the type of guests that Orlando attracts. In California, many of the visitors are locals for whom more seasonal offerings, such as holiday overlays on attractions – and more frequent turnover of entertainment – are required to cause them to return more frequently. Orlando parks have a higher percentage of out-of-town visitors who are likely to visit far less frequently and therefore don’t demand the same number of updates.

As one Central Florida local who canceled their WDW annual pass put it, “I understand that visitors coming from South America, Europe, or the Northeast only come every few years, and for them seeing the same parade or show more than once is fine – but for locals, it gets boring fast. There needs to be more for us. And not just us, for those who visit every year or even every other year. After a while, you wonder what else is out there and start looking for something different.”

For locals, it gets boring fast. There needs to be more for us. tweet this
While the demographic differences help explain why Disney and Universal update their California offerings more often than their Florida ones, the Orlando parks remain some of the most profitable for both companies. Locals in Florida seem more forgiving – some may even say apologetic – about the lack of new offerings at their home parks. This, along with the popularity that the Florida parks continue to see, means there is little incentive to have Orlando see anything near the turnover of entertainment offerings that California parks see.

There are some rumors that both Walt Disney World and Universal Studios Florida have new parades in the works. At Walt Disney World, the rumors point to a new nighttime parade, possibly heading to the Magic Kingdom, the only park at WDW to still regularly hold parades (both Disneyland and Disney California Adventure regularly see parades, though currently, only Disneyland has a daily parade). The rumors of a new nighttime parade in the park have been overshadowed in recent months with speculation that "The Main Street Electric Parade" may see a return to the Magic Kingdom.

That parade debuted at the park in 1977. It is one of only two nighttime parades ever to grace the Magic Kingdom. It most recently was used in Disneyland as part of a short, two-month stint timed with the opening of Star Wars: Galaxy’s Edge. In 2015, Disneyland saw the brand-new "Paint the Night" parade come to the park. Disney World fans had hoped that the technical wonder of a parade would make its way to Orlando, but as we get closer to the 50th Anniversary in 2021, that continues to look less likely.

There’s no question Disney World keeps entertainment and seasonal offerings longer than its California counterpart. tweet this
Over at Universal Studios Florida, rumors continue to point to the park, possibly adding their own nighttime parade sometime in 2021. The "Universal Spectacle Night Parade" debuted at Universal Studios Japan in early 2018 to rave reviews. Similar to Disney’s nighttime parade, the Universal Japan parade has impressive floats themed to popular franchises found within Universal parks include Harry Potter, Minions, Transformers, and Jurassic Park.

The nearly hour-long, 15-float-unit parade is augmented with projection mapping onto buildings along the parade route, and around 100 entertainers. Universal Orlando currently only offers one regular scheduled parade, "Universal’s Superstar Parade," which debuted in 2012, though it has seen some updates since then.

Currently, the newest parade in Orlando can be found at SeaWorld Orlando. The "Sesame Street Party Parade," the first parade in SeaWorld Orlando’s history, debuted in March 2019. Unlike Disney and Universal, SeaWorld’s business model – as laid out by previous CEO Joel Manby –focuses on locals within a 300-mile radius. While the park has seen success with this plan, it does require more frequent updates to its entertainment offerings, something the park has doubled down on in recent years, with new shows coming to all of the park’s main entertainment venues. One of the longest-running shows in the park is the orca show "One Ocean." It will be replaced in January.

For now, there remains little hope that Disney and Universal will "be fair to Florida," but with prices at the parks continuing to rise, it may soon be cheaper to just fly to the parks in California. In the meantime, there’s always SeaWorld.