When Pointe Orlando’s Regal Cinema theaters opened their 4DX special effects theater in 2017, it was one of the very first in the nation. Now, two years later, there are more than 700 4DX theaters worldwide, with plans for 79 new screens to be installed in the U.S.

There have been mixed reviews for the 4DX format, with some saying the in-theater effects – including smoke, leg ticklers, rain, strobe lights, and motion seats – are distracting from the films, while others argue they enhance the moviegoing experience and provide something truly unique.

Regal recently announced it has partnered with 4DX's parent company, South Korean-based CJ 4DPLEX, to roll out both the interactive 4DX theaters and their wrap-around, multi-screen "ScreenX" concepts in dozens of new markets around the nation.

Orlando is now one of the first cities in the nation to boast two 4DX theaters, with a brand new one recently installed at the Regal Waterford Lakes. While this provides a more easily accessible theater option for east Orlando, it’s a significant blow for the Pointe Orlando theater that already struggles to bring in locals (despite its beautiful late-1990s, modern-Art Nouveau design by the now-dissolved HOK Architect's Studio E). The theater remains one of the purest examples of the short-lived design studio's eclectic aesthetic, which came out of a collaborative approach. Other projects by the studio include CityWalk at Universal Orlando and Legoland California.

The lack of easy accessibility, along with the constant turnover of retail stores within Pointe Orlando, has made that theater practically a ghost town on some days, while nearby theaters like the AMC at Disney Springs have large crowds. At one time, Orlando’s 4DX demanded some of the highest ticket prices of any 4DX theater in the nation, though now both New York and L.A. surpass Orlando’s $25 adult ticket.

Even as more theaters introduce new experiences, including motion seats and improved food options, it hasn’t been enough to convince moviegoers to return – especially in the post-MoviePass era. In 2018, multiple subscription services kept people in theaters in record numbers, but 2019 has seen an estimated 4 percent drop in sales.

Regal was a latecomer to the theater-based subscription services, and still doesn’t offer a subscription that includes IMAX and 4DX, though users can opt to pay small fees to add these options. While the Regal Pointe Orlando offers one of the largest IMAX screens in Florida, frequent visitors to the theater notice it often appears relatively empty.

In Orlando, theater attendance issues are intensifying even more, as boutique theater chains like Alamo Drafthouse, Studio Movie Grill, Cinépolis USA, and Epic Theaters move in – or increase their presence – within the area. Pointe Orlando’s theaters used to provide one of the few indoor options for tourists on rainy days, but recent years have seen an increase in family entertainment centers pop up nearby, including Main Event, which sits directly below Pointe Orlando’s theater. 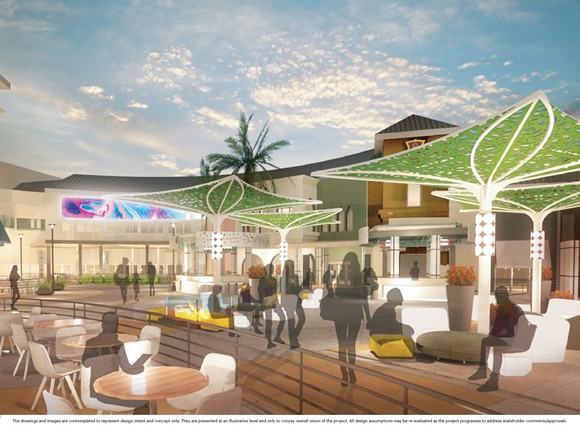 There is some good news for the theater at Pointe Orlando. A $32 million remodel of the shopping and dining venue will add escalators linking the theater to the I-Drive. The remodel will also see updated lighting, retail offerings, refreshed branding and signage, and a "visually captivating pathway" that is designed to address the crowd-flow issues that have plagued the shopping center since it first opened, more than two decades ago.

As of now, it is still too early to tell what impact the new Waterford Lakes 4DX will have on Pointe Orlando’s theater, or how much the remodel at Pointe Orlando will improve ticket sales at the shopping center’s theater.