In a major overhaul, Orlando's Holy Land Experience will end all theatrical productions In the past few days, rumors have been flying that The Holy Land Experience will be closing its doors in April. Today, owner Trinity Broadcasting Network confirmed to Orlando Weekly that the attraction will remain open but will dramatically scale back its operations beginning on April 19.

The theme park-like, living-museum attraction is well known for its daily crucifixion performances and its massive Roman colosseum-like building visible from I-4. The ambitious museum experience was the evolution of a previously successful conference center and small ancient Jerusalem model that Zion’s Hope had operated on the property since 1997. The ministry also saw early success when FDOT bought part of the property for a new interchange that was to link the area to a new mall, Mall at Millenia. 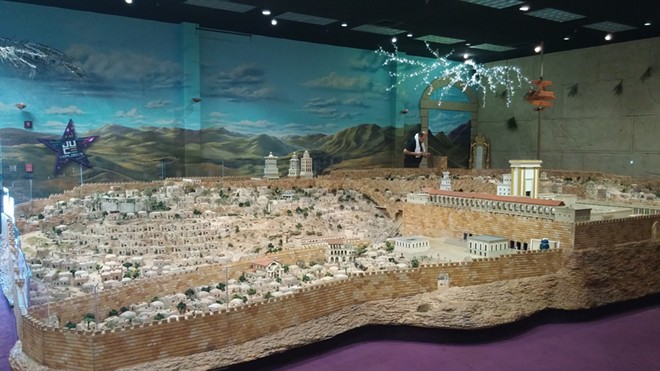 In 2002, Robert Van Kampen moved his private collection of Christian antiquities to the park in a custom-built exhibit known as The Scriptorium: Center for Biblical Antiquities. Van Kampen was an earlier support of the park, donating more than a million dollars to project. Housing one of the largest collections of antique Bibles, Biblical manuscripts, and Judeo-Christian artifacts, The Scriptorium remains one of the most popular exhibits at the park. The Scriptorium and its collection will continue to remain open at the Holy Land Experience.

By 2005, it was reporting a deficit of over $2 million. That same year, the founder of Zion’s Hope, Marvin Rosenthal, stepped down from the board and Zion’s Hope severed all ties to the attraction.

After a lobbying effort that initially set the park back by an estimated $10,000 to $30,000, it saw a small victory in 2006, when Florida Governor Jeb Bush signed a law in place that granted it, and other nonprofits that display biblical manuscripts or stage scenes from the Bible, from property-tax saving the attraction more than $1 million in taxes. The exemption wasn’t enough, and by the following year, the attraction was facing $8 million in debt when Trinity Broadcasting Network, the world’s largest Christian broadcaster, agreed to take over the debt as part of estimated $37 million deal that saw the Board of Directors controlled by TBN. Within weeks, more than 50 staff members had been laid off and CEO Tom Powell resigned. Powell also resigned from his position on the Board of Directors, leaving only TBN founders Paul and Jan Crouch and their two sons, Paul Jr. and Matt, on the board. Jan took over as acting president of the attraction.

The takeover was reminiscent of a similar one from TBN’s earliest days, when Paul and Jan Crouch had a falling out with Jim and Tammy Faye Bakker. In a strange twist of fate, the Holy Land Experience was just a few miles away from where the Bakker’s had attempted to relaunch their own ministry after they sold their Heritage USA Christian theme park in South Carolina as part of a financial and sexual scandal that eventually saw Bakker’s Praise The Lord ministry collapse. The strip-mall location of Bakker's former church is now a Bahama Breeze.

At the time of the Holy Land Experience acquisition, TBN had net assets valued at more than $1 billion. TBN began regularly broadcasting from the park and frequently promoted the attraction across their global network on television channels. Within four months, the attraction was already seeing positive results from TBN’s control, with attendance jumping by more than 30 percent and operating cost being cut by more than one-fifth.

Jan Crouch, known for her pink hair and frequent on-air joyful crying bouts, began putting her unique, prosperity-gospel-meets-Trump's-bathroom ornate style on the park. Soon the park became a wonderland of over-the-top sculptures, displays, and lights with the only linking theme between them being the large amount of purple and gold the items all seemed to feature. Within a year, TBN announced plans to build a large television studio on newly acquired land across Vineland Road from the original attraction. The City of Orlando approved an elevated pedestrian bridge connecting the two sites. The Book of Revelation inspired studio was to feature 24-carat gold-class curtain walls and floors inlaid with jewels. While that studio was never realized, the park instead built the 2,000-seat Church of All Nations in the round building evoking a Roman coliseum. Filled with state-of-the-art technology, the new performance hall became home to Holy Land Experience’s flagship productions and regularly hosted TBN television events.

Two years after acquiring the attraction, TBN purchased a 7-acre office park next door for $17.6 million allowing for room to grow, moving some offices to the office park enabling the park to give up some backstage areas for the Church of All Nations auditorium. 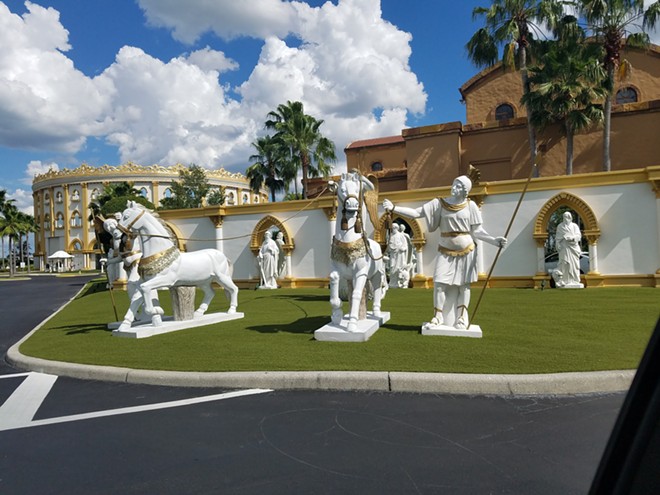 By 2012, the aging Paul and Jan Crouch began stepping away from their roles at TBN, with son Matt Crouch taking over more of the day-to-day operations at the network. Despite the attraction bringing Jan Crouch far more joy than nearly anything she had previously done, TBN reportedly began tightening the purse strings on Jan’s exuberant budget for the park. 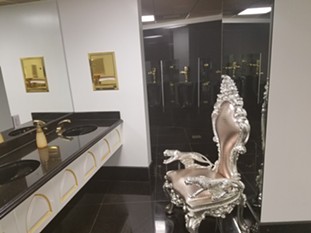 In 2013, Paul Crouch passed away. By this point, TBN was already on a path towards reinventing itself, shifting away from the charismatic prosperity gospel of its roots. Even as internal support for the park continued to shrink, TBN nonetheless remained supportive of Jan Crouch. The Holy Land Experience under Jan’s oversight hired many graduates from Lakeland’s Southeastern University, which was founded by her father, and she found a close-knit group of young people who quickly befriended her. Many continue to refer to her as Momma Jan, a nickname she picked up in the earliest days of TBN’s existence. Jan found one actor who played a motorcycle-riding Jesus especially comforting. The two of them became close friends after Paul’s death and were frequently seen together both at the park and around Orlando, especially for her standing weekly reservation at Winter Park’s now-closed Park Plaza Gardens where she regularly dined with the Jesus lookalike.

Under Jan’s leadership, the Holy Land Experience expanded its children’s attractions, branded to TBN’s Smile of a Child network, which was itself a pet project of Jan Crouch, who from the very earliest days of TBN had created her own puppet shows with her beloved puppet Babushka. In 2015, the park saw its last major expansion, when it opened the Trin-I-Tee mini-golf course attraction. The course allowed guests to putt golf balls at Goliath’s head, over the walls of Jericho, and to walk through a larger-than-life whale where they encounter a life-size animatronic Jonah.

One of the more well-known photo-ops added to the park was the 2015 addition of a hidden walkway where guests can stand next to a statue of Jesus in a shallow pond of water, looking as if you are walking on water. The background includes a mural of a sunset painted onto the Conroy I-4 exit ramp. The park was forced to remove the illegally-painted wall in 2016, after FDOT became aware of it via a complaint by the Freedom From Religion Foundation. 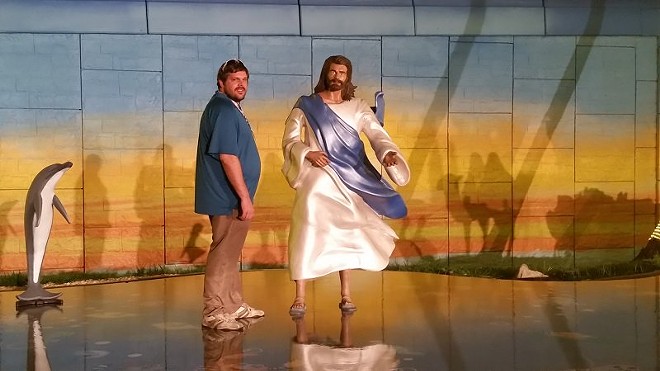 Not long after the mural was painted over, Jan Crouch suffered a stroke, dying six days later on May 31. Just over a month after her passing, the Holy Land Experience held a large estate sale where it got rid of many of the ornate items Jan had added to the park. Soon after, the park saw a complete update that attempted to restore much of it to its historically accurate, pre-Jan Crouch design. Those original designs were done by some of the themed entertainment industry’s leading designers, including some who also helped design much of Islands of Adventure. Other leading local artists, like Thom Mesrobian, helped design  or performed in many of the park's better-known shows with the park being a hotbed of local artists and performers.

At the same time, TBN announced it would be closing its gift shops at its studios in California and Tennessee. TBN continues to shift away from church service-style broadcasts to shows with a broader appeal. It now has a weekly talk show hosted by former Arkansas governor Mike Huckabee, a knock-off version of The View called Better Together, a non-stop pipeline of made-for-TV movies, and a show hosted by Growing Pains actor Kirk Cameron where he has "uncensored talk about faith, family, and what matters most," while exploring California with his friends. With other conservative stations like Hallmark, now being forced to address liberal topics, and in the process isolating their more conservative viewers, more wholesome entertainment-driven programming may allow TBN to remain relevant, even as Christianity shrinks in the U.S. A spokesperson for TBN noted to Orlando Weekly that viewers were wanting more original programming, and that under Matt Crouch’s leadership the network had seen success with newer format shows like "Better Together."

In 2019, Holy Land debuted a three-hour-long, 40-person production with a Bollywood like number and numerous custom filmed video vignettes. Produced by Robert and Elizabeth Muren, best known for their cinematic musical The Covenant, the 2019 production of "David: The King of Jerusalem" remained in rotation at the park with three other just as ambitious productions filling the park’s calendar throughout 2019 and early 2020. TBN confirmed to Orlando Weekly that it will be ending all theatrical productions and other entertainment, returning the park to its original focus of being an educational living museum attraction. The Church of All Nations will continue to be used by a local church lead by Grammy-nominated Gospel singer Tye Tribbett.

Mike Everett, the General Manager of The Holy Land Experience, explained that "the change will refocus the park on its original plan and function."

"The Scriptorium, which holds rare and unique biblical artifacts and a scale model of ancient Jerusalem and the City of David, will continue to serve as the park’s main educational attractions, and Live Church Orlando will maintain use of The Holy Land Experience’s facilities for their church services at The Church of All Nations theater," said Everett. He and other TBN spokespeople were not able to say exactly what the future will hold for the park, only that "the Holy Land Experience will also evaluate the best and most efficient use of the property, assessing other economic opportunities, including redevelopment," noting that they must be "good stewards" of the opportunities and land they’ve been given.

In a quickly changing world, the Orlando location – less than a five-minute walk from one of the highest-grossing malls in the nation and beside one of the busiest roads in the state – might end up being the graveyard for one of Orlando’s most unique attractions.