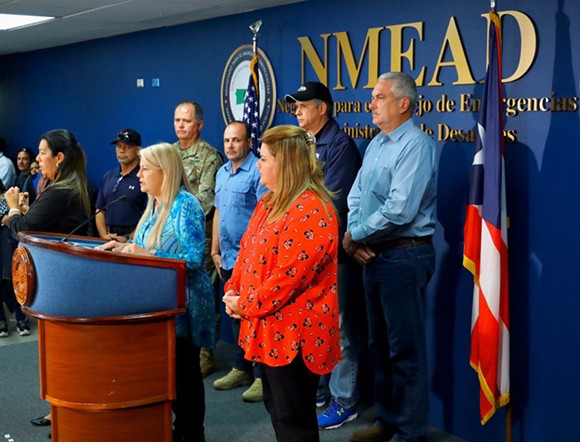 Puerto Rico has been rocked by two earthquakes in as many consecutive days.

On Tuesday morning, a 6.4 magnitude earthquake struck the island, reportedly killing at least one man and leaving some 300,000 people in southern Puerto Rico without water. That quake came on the heels of a 5.8 magnitude temblor that hit the southern part of the U.S. territory Monday, just over 1,000 miles off the coast of Florida in the Caribbean Islands.

Along with word that hundreds of thousands of the island's population of 3.1 million lost water service, reports also included power outages and property damage. The U.S. Geological Survey said around 400,000 would have felt the quake. The reported fatality was a 77-year-old man in the city of Ponce.

"People are afraid to go to bed, to then be woken up to worse earthquakes than the day before," a resident told CNN.

Vázquez urged residents to remain calm through anticipated aftershocks and while awaiting the return of water and power services, which engineers are working to restore. She noted the resolve her people showed during Hurricane Maria, which occurred only two years ago in 2017, and asked they summon that spirit once more.

Many of the people fleeing the wreckage of Maria found safe harbor in Orlando. Orange and Osceola counties' Puerto Rican population increased by 12.5 percent in 2018.

María "Mayita" Meléndez, the mayor of Ponce, told NBC News that her government is preparing open areas and parks with tents for people who want to stay away from unstable structures that may collapse.