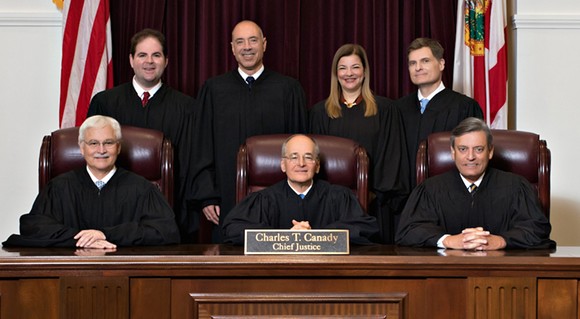 The Florida Supreme Court lacks the diversity needed to satisfy the many legal needs of Florida’s divergent, ethnic and racial communities. Justice Thurgood Marshall once said: “… one-sided justice” does not allow for our adversary system to fully consider the impact that a decision can have on “all the people it will affect.” Florida Gov. Ron DeSantis can right this wrong and enhance public confidence in our judicial process by appointing an African American to Florida’s high court.

Florida is the nation’s third-largest state with 46 percent of the general population consisting of people of color. Yet, whites comprise 4 out of every 5 judges, and most of them are male. The current makeup of the state Supreme Court is particularly glaring. Five white men now sit on Florida’s high court, and there has not been a Black jurist since Justice Peggy Quince’s term ended on January 8, 2018.

To his credit, the governor has appointed eight Black judges to the lower courts, a record when compared to former Gov. Rick Scott’s. Those appointments will help get more African American jurists into the pipeline for higher appellate judgeships. However, the big yardstick remains appointments to the Florida Supreme Court, a measurement where Gov. DeSantis has fallen short.

Ideology aside, the Florida Supreme Court needs a Black jurist. tweet this
Florida’s current situation does not even mirror that of the nation where only 15 percent of the state supreme court seats are held by people of color. Florida needs an independent judiciary that inspires confidence, trust and reflects the diversity of the state’s population.

Gov. DeSantis failed last year to appoint a Black jurist while filling three court vacancies. As a newly elected governor, he replaced three justices appointed by Democratic governors, flipping the once moderate Florida Supreme Court into one of the nation’s most conservative. He now has a chance to remedy the court’s lack of diversity due to the appointment of former justices Barbara Lagoa and Robert Luck to the 11th U.S. Circuit Court of Appeals.

The Florida Supreme Court is no inconsequential institution. It remains the arbitrator of key legal decisions that will impact all Floridians. The court’s decisions will run the gamut, from expelling problem lawyers to implementing controversial state policies and programs.

Florida’s Supreme Court most likely will shape how ballot initiatives — medical marijuana, preserving environmentally sensitive lands and the re-instatement of felons’ voting rights will be implemented. The high court also will determine if local governments can ban the use of certain foam containers, how the police can use facial recognition in drug arrests, or whether laws governing sexually transmitted diseases only apply to heterosexual couples.

“Sat Cito Si Recte” is the Florida Supreme Court motto. It’s Latin for “Soon enough if done rightly,” a phrase indicating how important it is to take the time to achieve true justice. But, given the governor’s influence in picking judges, what message does the selection process send to Florida’s 3.5 million black residents? Will they and the rest of Florida’s diverse populace have confidence they will get justice?

The upcoming appointments to the Florida Supreme Court remain a true indicator of how seriously any governor regards an independent judiciary that represents all of Florida. Gov. DeSantis can show he’s taking a pragmatic stand and appoint a Black jurist to the High Court.