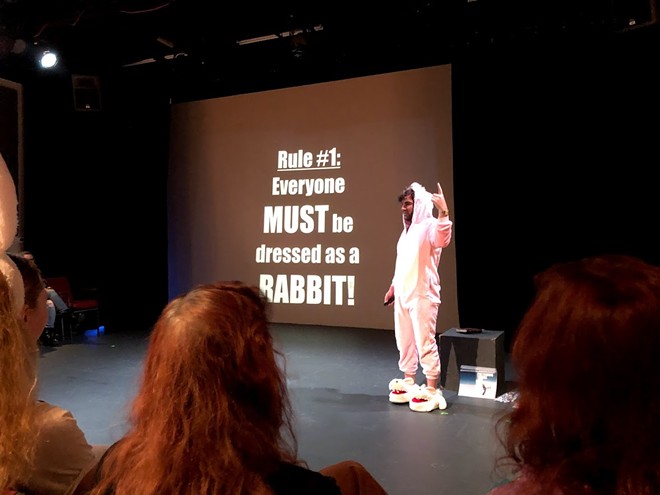 Here are four opening-night reviews from the 2020 Orlando Fringe Winter Mini-Fest, which continues through Jan. 12 at the Lowndes Shakespeare Center. For more information see this week’s Live Active Cultures, and visit ofwinterminifest.com for tickets.

The Lightweight
Lil Theatre Company, Orlando FL
Remaining performance: Sunday 1/12 at 6:15 pm
Orlando Fringe theater producer Lindsay Taylor makes her stage debut in The Lightweight, a hard-hitting solo dramedy about finding personal redemption through pugilism, but you wouldn’t know she’d only been acting for four months based on this passionate performance. The script, written by past Critics’ Choice winner Willi Carlisle, tells the sadly realistic story of a nerdy college student whose literary dreams are derailed by the campus’ alcohol-fueled rape culture; the tale is fictionalized, but Taylor is so invested you’ll believe it’s her own. Taylor’s comic timing and elastic expressions elicit big laughs from the avalanche of pop-culture puns, even if you don’t understand all the Game of Thrones references. But it’s during the quiet devastation of the emotional ending that you’ll discover this Lightweight packs a serious punch.

Larry
Candy Bones, Vancouver BC
Remaining performance: Saturday 1/11 at 6:30 pm, Sunday 1/12 at 8 pm
In the spirit of “anything can happen at Fringe,” one of this year’s performers has failed to show up, which leaves the lanky, long-haired stagehand Larry (Candice Roberts) the perfect opportunity to prove that it can’t be that hard to put on a show. What follows is an increasingly surreal series of awkward variety acts – ranging from a barrage of bad penis jokes, tap dancing to heavy metal music, and audience-participation Budweiser chugging – all wrapped in a blanket of casual misogyny. With his patently fake ZZ Top beard and incessant string of sexist non sequiturs, Larry is like the Canadian poster boy for toxic masculinity, but he’s trying his best to get “woke,” if only to impress the girl of his dreams. Larry’s odyssey of self-actualization involves an unforgettably awful cover of a Pink Floyd classic, and culminates in a soul- (and skin-) baring dream sequence that demonstrates the fearless lengths Roberts will go to for her audience. Roberts calls her unique brand of feminist physical theater a “clown show,” but don’t go in expecting Cirque du Soleil. If, however, you want to experience the full breadth of Fringe-ness packed into one performance, this is your show.

It’s Rabbit Night!!!
A Mulled Wine, Newton New Zealand
Remaining Show: Saturday 10:30 pm
A couple of years ago, comic Jon Bennett brought a gorilla suit-based show to Fringe that I felt portended the fall of civilization. This time, he’s back with a pink bunny costume, and while I don’t feel any better about society’s collapse, at least I laughed myself silly for an hour. Describing the action (or lack thereof) in this show would do it no justice; suffice it to say there will be unintelligible sing-alongs, uncomfortable anecdotes about Bennett’s sexual escapades, and repeated invitations to engage in an orgy. Some people might think being harangued by an apparent escapee from the all-Hobbit remake of A Christmas Story sounds like an anticlimactic way to spend an evening; Bennett might agree, as he openly admits that his show is a five-minute skit stretched out into absurdity. But if you’re willing to take a risk on pure stupidity, and appreciate an adorable bunny video or 12, It’s Rabbit Night is ideal late-night Fringe fare. And even if you aren’t, attend Bennett’s benefit for the Australian bush fires (which have directly impacted his family on Kangaroo Island) at Savoy on Tuesday, Jan. 14.

Six Chick Flicks
Kerry Ipema, Brooklyn NY
Remaining performances: Saturday 1/11 1:45 pm, Sunday 1/12 5:54 pm
In ancient times – say, the mid-2000s – you could go to a movie theater and see a movie that did not involve superheroes or interstellar explosions, but rather focused on female characters and romance. Today, unless its title is Little Women, those films have been banished from cinemas to streaming services and the Lifetime network. Luckily, the crack comic team Kerry Ipema and KK Apple are here to affectionately skewer six classics from the era when so-called “chick flicks” could still succeed at the box office. The show, which was created in collaboration with “Fringe God” TJ Dawe, consists of 10-minute, two-person parodies of a half-dozen movies, beginning with Titanic (whose buoyant doors become a running gag) and ending with a ridiculous recreation of Dirty Dancing’s iconic choreography. Eighty percent of the script is a straightforward spoofing of the movies’ plots and performers, which Ipema and Apple execute with SNL-worthy aplomb. But they also occasionally step outside the narrative to point out how these supposedly female-friendly films reinforce the patriarchy by pitting women against each other and reinforcing unrealistic expectations; their repeated references to the “Rose Effect,” which often infects screenplays written by men, are particularly pointed. Although I laughed out loud even at the lampooning of The Notebook, which I’ve never actually seen, I ultimately wished the subversive elements were even sharper, so fans of these films couldn’t so easily laugh off their problematic elements. By the time Ipema and Apple took their well-deserved final bow, I mostly just wanted to watch Legally Blonde again, which I’m not sure was their intention. Note: The remaining performances have sold out, but the show is scheduled to return to Orlando in May.