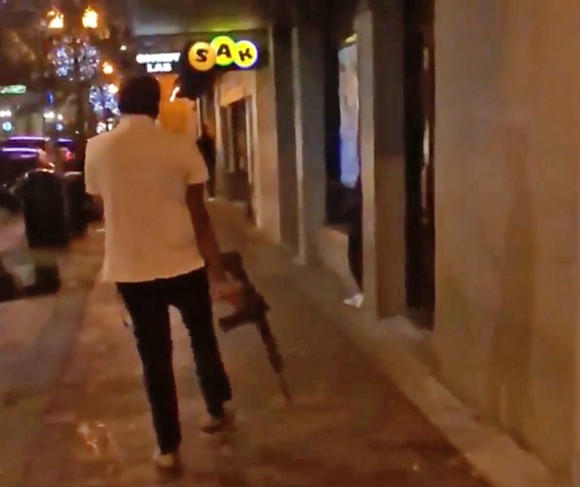 The Orlando Police Department says the incident, which took place near the intersection of Pine Street around 3 a.m., was prompted by a fight outside a nearby club. The man identified in the video, Ryan Sarjoo, claims he was punched earlier in an attempted robbery. He then went to his car to retrieve the rifle and a loaded handgun, and returned to the scene to fire a "warning shot" over the heads of his assailants.

Witnesses called the police and took cell phone videos. When officers arrived, witnesses say Sarjoo had placed the rifle back in his car, but he was still armed with a cocked handgun in his pants when he was apprehended.

Sarjoo was arrested Thursday for openly carrying a firearm, and booked at the Orange County Jail, where he later bonded out. Orlando Police say they plan to press more charges, including discharging a firearm in public and improper exhibition of dangerous weapons.

WESH was first to run the videos, and they spoke to Sarjoo later, who said the people trying to rob him had surrounded him and punched him in the face. They also interviewed witnesses who affirmed he was trying to defend himself. Police and terrified onlookers seem to agree his response was dangerously disproportionate.

"This type of reckless behavior will not be tolerated in our city," said OPD Chief Orlando Rolón in a statement. Fortunately, no one was hurt in the incident.