Orlando Police consider tasing someone on a bicycle excessive force, "except in cases of aggressive resistance."

In May, Officer Peter Meier tasered a 19-year-old boy fleeing on a bike. The young man of color fell and skidded on the ground, as seen in body camera footage released in a report by Orlando Sentinel. For breaking OPD's force policy, Meier was punished with a written censure following an Internal Affairs investigation in October.

Meier told investigators that he saw the teen, who was with two other young men biking May 5 at Oak Ridge Road and Millenia Boulevard near Millenia, pop a wheelie through the intersection. 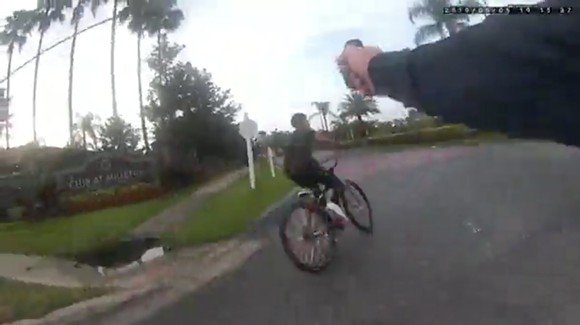 In response to the wheelie, Meier said he flashed his patrol lights and called over the teens, but they rode away. He pursued them in his squad car, adding that he attempted to drive in front of the teen bicyclists and block them three to five times, but they kept riding around him. Meier called for backup.

Recently released body camera footage worn by both officers shows at least two squad cars swerving around one 19-year-old. Then Meier gets out of his car and chases the teen. Just as the teen turns his bike away from Meier and begins to ride away, Meier pulls out his taser and hits the teen, who falls to the ground, sustaining cuts and abdomen wounds from the taser prongs.

In his report, Meier said the teen slowed down his bike and stood on his pedals in a posture suggesting "flight on foot was imminent to escape or fight," reported the Sentinel.

Meier's description of events, which starkly contradict camera footage, was good enough to get an approval for use of force by Sgt. Luis Suero. But after watching body cam video, Lt. Andre Tankovich initiated the internal investigation. Tankovich said the teen "appeared to be in continuous motion on the bicycle when Officer Meier deployed his Taser... [and] cause[d] the subject to fall on the ground."

Another teen in the group of bike riders was tased, but there's no word yet on whether OPD is investigating that use of force.