January 12, 2020 at 11:37 AM
comment
Here are our final reviews from day 3 of the 2020 Orlando Fringe Winter Mini-Fest, which continues through Jan. 12 at the Lowndes Shakespeare Center. For more information see this week’s Live Active Cultures, and visit ofwinterminifest.com for tickets.

The Myrtle Sisters: Out of Time

Emerging out of a lo-fi steampunk time machine, the trio of bespectacled siblings from the Jazz Age has smashed into our era with a Macarena- sworn mission to collect and share dances from across the centuries. It’s a sad commentary on current culture that the best 2020 has to contribute is Baby Shark and Flossing, but the Myrtle Sisters observe and ape it all with enthusistic abandon during the audience-participation opening of this delightful all-ages show. This talented trio of physical comics could easily milk an hour of material out of their interactive improv and repertoire of toe-tapping old-timey pop tunes like “Sister Kate,” which they sing in nostalgic three-part harmony. But Out of Time achieves a higher level of entertainment by investing each character with distinct personalities and motivations, which are winkingly illuminated in fourth-wall-breaking asides. Shirl (Candice Roberts, who also stars in Larry) is the high strung, guitar strumming leader; Gladys (Kat Single-Dain) is the underappreciated worker-bee; and goldfish-obsessed Edna (Nayana Fielkov) may seem dim, but she shines the light of truth when it counts. Their affectionate arguing and acrobatic dance moves reminded me of a real-life version of the Triplets of Belleville. The action, which includes of slow-motion pie fights and fishbowl headstands, is nothing less than inspired inanity, and the briskly-paced production leaves its audience wanting more. This undeniably adorable adventure would make a perfect first Fringe experience for kids and kids-at-heart. 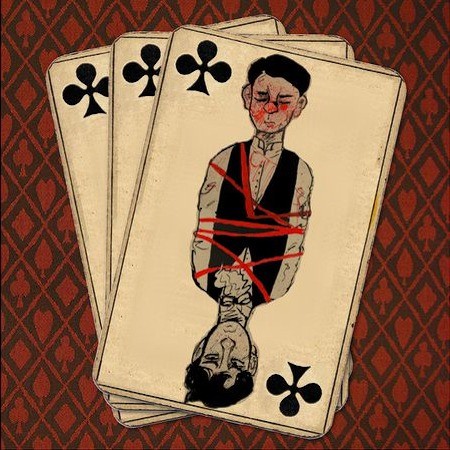 When Nick Ryan and Katie Hartman first brought Eddie Poe to Orlando a few years ago, this second installment of the trilogy they started with the spectacular Edgar Allan was still very much a work in progress. Today, after numerous edits and dozens of performances, the show has evolved into a worthy companion to the award-winning original. In this episode, Ryan takes the title role as the 16 year old Edgar Allen Poe, who leaves his secret fiancee to study dead languages at the University of Virginia. Poe promised to forswear his former vices, but the play doesn't really burst to life until Hartman reemerges as his Jekyll-esque alter ego, encouraging him to indulge in drinking and diddling. When a foppish frenemy makes a play for his fiance, Edgar engages in a high-stakes card game – cleverly depicted by casting shadows – with life-altering consequences. The Coldharts are always engaging performers, especially during their silly yet sinister musical sequences, and their script makes some potent (if unsubtle) points about the hypocrisy of America’s alleged egalitarianism. My chief critique is that the pacing lacks urgency in the opening scene, yet feels overly abrupt in the final moments. The show might not yet be a perfectly crafted jewel like its predecessor, but it certainly made me eager to see the concluding chapter in the youthful misadventures of America’s favorite proto-Goth.