An Altamonte Springs resident posted a video reminder on Reddit Sunday that native Florida black bears lived here before us, and continue to wander "our" neighborhoods at will.

The footage, titled "Big ol' bear in the neighborhood," was taken on a Nest door cam and shows a massive ursine visitor walking past their front porch entrance.

Big ol' bear in the neighborhood from r/florida

Bear sightings are nothing new for Central Florida residents, of course, but this is still unnerving as hell.

Last February, Ocala National Forest temporarily closed due to bear sightings, and in March, a black bear mother and cub climbed a tree outside of the Orlando Science Schools campus off North John Young Parkway. In October, Sebring Middle School advised parents in a Facebook post to come pick up their children, after a bear was spotted nearby.

The Florida Fish and Wildlife Conservation Commission says that as temperatures rise, black bears in Florida become more active as they search for food. Last month, FWC authorities voted to leave bear hunting on the table as a population-control option, if interactions between bears and humans escalate. 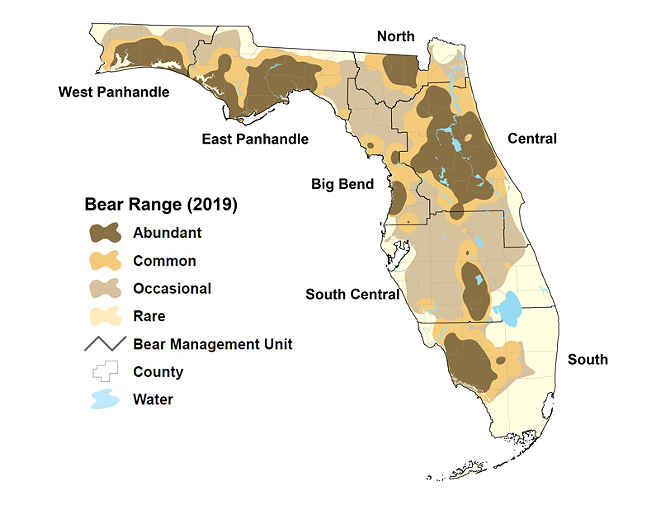 One way to avoid your own bear encounter is to securely dispose of trash. FWC says bears become more active as the weather gets warmer, and this year's unseasonably warm winter is likely to increase sightings.

If you encounter a bear at close range, FWC says it's best to "remain standing upright, back up slowly and speak to the bear in a calm, assertive voice." Don't make any sudden or abrupt movements, or invite the bear closer, just "back away slowly and be sure the bear has an obvious escape route."