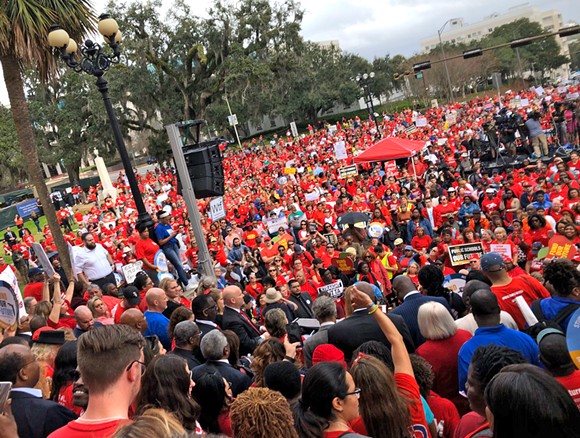 Tens of thousands of Florida public education workers and their supporters are rallying outside the state capitol in Tallahassee on Monday to demand overdue hikes in teacher pay.

On Tuesday, the state legislature starts a new 60-day legislative session for 2020, during which Florida law makers in the Capitol will be voting on bills and sending newly passed laws to the Governor.
"The point is to catch the legislators before they go into session," said Wendy Doromal, president of the Orange County Classroom Teachers Association. "Hopefully they'll listen." The "Take on Tallahassee" Rally for Education event aims to advocate for an increase in education funding and teachers' pay, among other issues. Doromal said that about 450 Orange County teachers are expected to attend. Johanna López, an Orange County teacher and School Board District 2 member said that Florida public schools are ranked low in the U.S., and have been for over a decade, while the rest of the country progresses. "What we are seeing is that there is no respect for the education field," López told Allá y Aquí Magazine. "When you respect the education field, you give more funds so that teachers' salaries can remain competitive." Florida consistently ranks among the bottom 10 states in the country for student spending and teacher pay, per the Florida Education  Association website. Florida also earned an "F" in school spending, according to Education Week's most recent report. López said that low ranking schools should matter to everybody because they affect our communities in multi-faceted ways. "The grade of a neighboring school affects your property value," explained Lopez. "So, does it or does it not affect us all, the fact that our schools should be properly funded, so that they may offer better services, and finish with better academic averages?"
Polk County teachers face an additional challenge
Billy Townsend, of Polk County School Board District 1, exposed on Facebook an email from the Florida Department of Education last week, in which the agency warns to fine and even fire Polk County teachers who attend Monday's rally. Though striking is illegal for teachers in the state of Florida, the teachers in Tallahassee are not striking. Instead, they are taking a personal day off to attend a rally and make their voices heard. They are hoping to influence state law makers before the new legislative session. "Teachers definitely feel disrespected," Rep. Carlos Guillermo Smith of District 49 said. "The Florida Department of Education is essentially threatening Polk County teachers for wanting to attend the rally, it's ridiculous. This type of intimidation of our teachers is unacceptable." Scott D. Howat, chair at Seminole State College, said the Board has encouraged teachers to speak out, though Orange County Public Schools has made no official statement one way or another regarding the rally. "Teachers have the right to certainly tell their law makers how they feel," Howat said. Doromal said teachers are not asking for anything that they don't have coming to them, in reference to the Governor's proposal to raise entry level pay for teachers to $47,500 in order to stimulate recruiting and retention of new teachers. "Governor DeSantis said this would be 'the year of the teacher,' so we'll see," she said. Doromal, however, said this proposal has received sharp criticism from the Florida Education Association, arguing that it does nothing for seasoned teachers of ten, 20, or even 30 years in the field. "You have to focus on those folks who have given their lives, and their blood and their sweat for kids over generations," said FSA President Fedrick Ingram at a "Fund Our Future" rally. The Governor has proposed a bonus for seasoned teachers, but Doromal said raises come slowly to teachers and that they have been dealing with "bonus schemes" for the last 13 years. "There's always a catch," Doromal said. "And when you go to the bank for a mortgage loan, those bonuses are useless. [Banks] only look at annual salary." "We need to improve teacher salary overall," she said. "We don't think that teachers should be working two jobs, or living with their parents to afford a living." 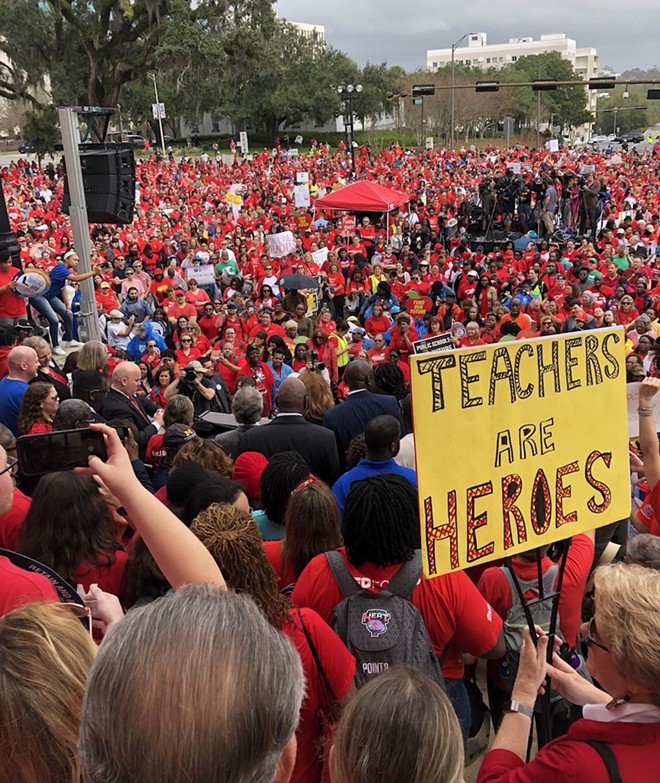 Currently, Florida ranks as 47th in the country for teacher pay. The Governor's proposal does not include talk about raises or longtime teachers' pay. All his proposal would do is boost Florida's numbers up to third in the nation, in terms of overall teacher compensation. Smith said that Democrats have been fighting to increase public school funding and teachers' pay for years, and that, though it is good to see the Republican side finally participating in the conversation, "the Devil's in the details." "That's why its so important that teachers are rallying in Tallahassee," Smith said. "Because it's important that veteran teachers have their voices included in the conversation during this critical time when we are going to be taking action on increasing teacher pay." Smith also said that Florida has been on a Republican-accelerated agenda to privatize education since the days of Gov. Jeb Bush that has bled taxpayer money out of our traditional public schools. "We have a constitutional obligation to fund our public schools," Smith said. "That's written into the Florida state constitution, that we have a fully funded, high-quality public school system, which has not been the case. We have to start certainly by undoing some of the damage that has taken place with various privatization efforts." Doromal said supporters were welcome to join the rally on Monday and that those who were not be able to attend are being asked to wear red in show of solidarity. For more information, visit the FEA website.