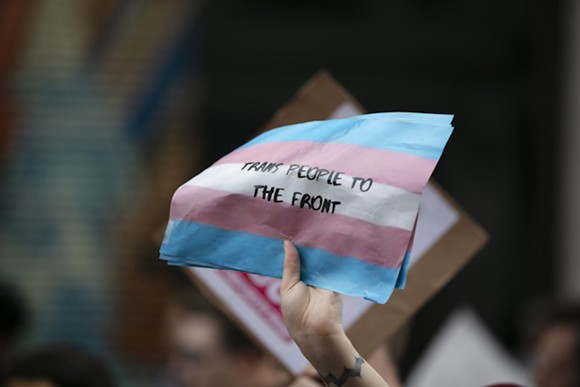 The Howey-in-the-Hills lawmaker doesn't just have his own blackface controversy (très chic!), but shrugged it off by adding a brownface cherry on top. You don't support transgender people having bathrooms, or boilerplate medical forms to hand to the pediatrician for basketball camp, like everybody else? Minstrel-man takes your inhumanity and doubles down.

On Monday, Sabatini filed House Bill 136, which would make it a second-degree felony for health care practitioners to administer treatment for transitioning or changing a child's sex.

He calls it the "Vulnerable Child Protection Act," which would be like calling a rule prohibiting feeding an orphan the "child gluttony act." In a press release, Sabatini says the law, if passed, would define sex as the "biological state of being female or male based on sex organs and chromosomes." The only exception would be treating genetic disorders that impaired sexual development.

Some doctor, like a second after the baby is born, will pinpoint the cosmic spot on which a baby lands on the churning seas of gender's mysterious fluidity with the ease of a couple physical and chromosomal checkmarks and put it on a chart. After that, if this bill passes, no child or parent would be able to solicit the guidance of a health practitioner in the state if the doctor maybe missed the child's exact gender at birth.

Sabatini calls gender transitioning treatments "disfigurements." tweet this
"No parent should be allowed to sterilize, castrate or permanently disfigure a child,” said Sabatini on Facebook.

And just in case someone trained in doing transition treatments in a safe and sterile manner gets a conscience or remembers an oath or some shit, the bill would sprint straight to locking 'em.

In the press release for the bill, Sabatini says he worries that there is not enough scientific research to show that, once transitioning starts, a person can safely return to their original gender designation.

The bill blocks health workers from administering or prescribing puberty-blocking medications or giving testosterone to females and estrogen to males, transitioning surgeries that sterilize like castration, vasectomy, and hysterectomy and mastectomies.

Sabatini calls such treatments "disfigurements" in the release, and condescendingly interchanges being transgender with having gender dysphoria.

"The goal of this bill is to protect innocent youth from being permanently disfigured," says Sabatini's press release.

It's the conclusions of a man who says black/brownface was "OK" like 15 years ago, so whaddya expect? Stay on top of Orlando news and views. Sign up for our weekly Headlines newsletter.