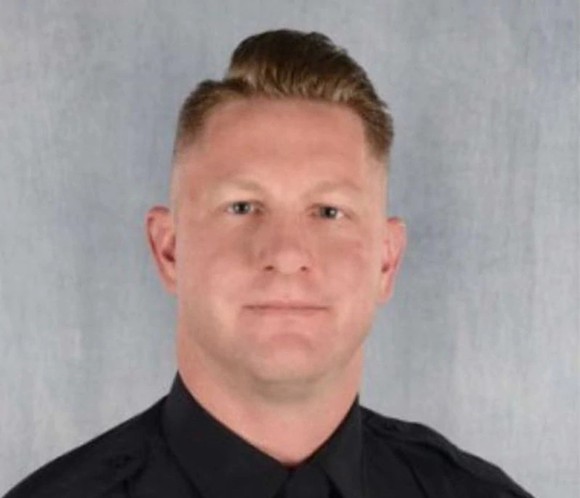 An Orlando Police officer has received a verbal reprimand after video surfaced of the cop proceeding to "taunt, belittle, humiliate and even incite ... violence" against teenagers during an arrest.

Putting aside the merits of the wrist-slap, thankfully, this didn't end with Black kids taking the bait and giving an armed cop behaving erratically – which is as scary as it gets, folks – a reason to maim or kill.

This officer was verbally warned for an accusation of racism in 2016, and was hit with an excessive force lawsuit in 2017. And! He was named OPD's 2018 "patrol officer of the year."

Officer Jonathan Mills was given his most recent verbal warning, reports Orlando Sentinel, after body camera footage showed him attempting to provoke two 19-year-olds – at least one of whom was Black – and a 17-year-old, while detaining them for allegedly loitering outside a Parramore liquor store in May. Internal Affairs investigator Mike Stanley says the video showed Mills interacting with the teens in a way "not representative of the high standards of the professional conduct expected from members of the Orlando Police Department."

At one point in the video, says Stanley, Mills grabs the hand of one of the teens and says "these soft hands have been through something. You have no marks on your knuckles, you’ve never been in a fight." Mills also took a phone from a teen and tossed it on the ground.

Then, says Stanley, Mills turned to another one of the teens and said: "I hope he runs."

He sounds like a drunk bully. One authorized by the state to carry a gun.

The teens, who look to be several years, maybe decades, younger than the cop, didn't bite, according to the investigation. Being a young person, particularly of color, particularly Black, means, unfortunately, being raised to eat it when law enforcement officials to demean and dehumanize.

The disciplinary issues were brought to light when Mills was named patrol officer of the year in 2018, but police Chief Orlando Rolón said, going forward, Mills would act professionally. tweet this
The whole time, in fact, the teens were "detained and seated on the ground in a position of disadvantage," said Stanley, and Mills' actions served no law enforcement purpose. Stanley further reported that Mills claims he grabbed the teen's hands in order to "[break] the cycle of whatever he’s thinking about." This guy is a mind reader now.

Stanley noted that the video shows there was a screwdriver within the teen's reach, but that Mills never removed it – and thus cannot claim he thought the teen to be a threat that needed to be eliminated with taunting and hand-grabbing. As for the phone in the video, Stanley said the teen was speaking quietly, as though he was concealing his actions.

Mills' statement about his hope that one of the teens would run, said Stanley, "serves to discredit Officer Mills' belief [the teen] posed a threat." In the incident report, Mills said the teens were causing a disturbance and yelling at police, so he told them to "move on." Mills said he detained the teens after repeatedly telling them to “to not stop, stand or otherwise impede the flow of traffic on a sidewalk."

Later, the white mentor, who had witnessed the scene from the New Image Community Center, told internal investigators she "was able to approach the officers ... for reasons based on my visual appearance."

From the body camera footage, Stanley said he could not corroborate the Black mother's claims. Mills denied being rude or racist. He also claimed the teens were being "confrontational" and taunting him with anti-police rhetoric. The teens were arrested for disorderly conduct, but prosecutors dropped the charges for the adult teens. The 17-year-old minor's records are sealed.

A verbal warning is the same punishment Mills got for an investigation into accusations that he said racist things during a March 2016 traffic stop. But the 2016 infraction was cleared from his record, say OPD officials, making the incident in May his first offense. In 2017, the city of Orlando settled a federal suit for an undisclosed amount with a man claiming Mills sexually assaulted him by putting his hands down the back of his pants while searching for drugs.

Another obvious suggestion: more vetting of officers with disciplinary issues, just in general.