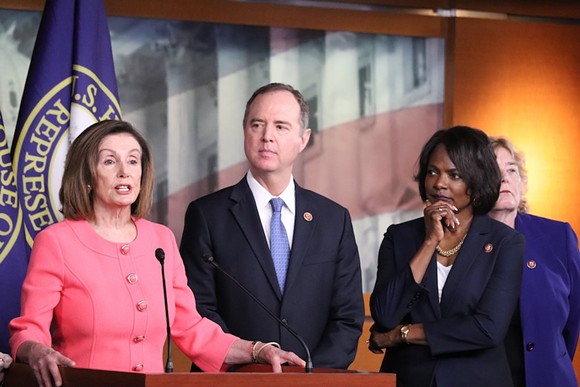 On Wednesday morning, House Speaker Nancy Pelosi announced the articles of impeachment against President Donald Trump will finally head to the Senate, after holding them for 28 days. This sets in motion a trial in the Senate that will begin on Jan. 21.

Pelosi’s comments also included praise for Orlando Congresswoman Val Demings, who was a central figure in the House impeachment hearings, and who will serve as one of seven managers to physically "transmit the articles of impeachment to the Senate." As an impeachment manager, Demings will walk with the group of representatives to the Senate chamber to hand over the printed articles. After reading the charges aloud, the managers will then return to the House to give a verbal report.

"I've enforced the laws and now I write the laws," Demings said during the debate before the House impeachment vote. "But the laws mean nothing if the accused can destroy evidence, stop witnesses from testifying and blatantly refuse to cooperate."

It’s no wonder Demings takes evidence and testimony so seriously. Demings served with the Orlando Police Department for 27 years, four of those as Chief. Demings stood out during House proceedings for her no-nonsense approach to law enforcement at the highest levels of government. Last year, she was a member of both the House Intelligence Committee and the Judiciary Committee, which sent the impeachment counts to the whole House for the votes.

The charges against Trump include abuse of power and obstruction, in connection with the Trump administration withholding aid to Ukraine while Trump was pushing Ukraine’s president to investigate potential Democratic challenger Joe Biden’s son.

"The evidence against the president is overwhelming," Demings said in a statement. "The president abused his office to try to cheat in the 2020 election, and then covered it up," "He shall be held accountable."

"Each senator still has the power to do the right thing." – Congresswoman Val Demings tweet this
After Demings and the other managers deliver the articles, Senate president pro tempore Chuck Grassley will swear in Supreme Court Chief Justice John Roberts to preside over the trial. Roberts’ first task will be to swear in all 100 senators as jurors, including Florida Senators Marco Rubio and Rick Scott.

Rubio has already said a lot on Twitter about the impeachment, including that "Democrats keep playing stupid games" with the timeline. Rubio says his vote "will be guided by 2 factors." First, that "conviction carries a mandatory & extraordinary minimum sentence, removal from office," and second, that "an alternative remedy is available, the 2020 election."

Despite the "mandatory & extraordinary minimum sentence," Rubio says the House witnesses were the only ones he needs to hear from to render a judgement, saying the "Senate has no duty to go beyond those witnesses in our trial."

Rick Scott has also already decided against hearing from witnesses as a juror, even declaring his mind to be made up on the vote. He told conservative radio host Hugh Hewett, "I don’t think we’re going to have any witnesses. I think it’ll be over right then. I think it’s going to be pretty fast."

Scott says he would vote to acquit President Trump, and move on to more pressing issues.

"Let’s do the things that are important," Scott told Hewett. "Let’s get drug prices down, balance a budget, secure our border."

While some reports suggest as many as four Republican senators could join with the 47 Democratic senators to vote to allow witnesses, it would still not be enough votes to reach the two-thirds threshold needed to convict and remove Trump from office.

"Each senator still has the power to do the right thing," Demings said in a statement. "I know that as each senator considers whether to side with justice or corruption, the voices of the American people will matter."