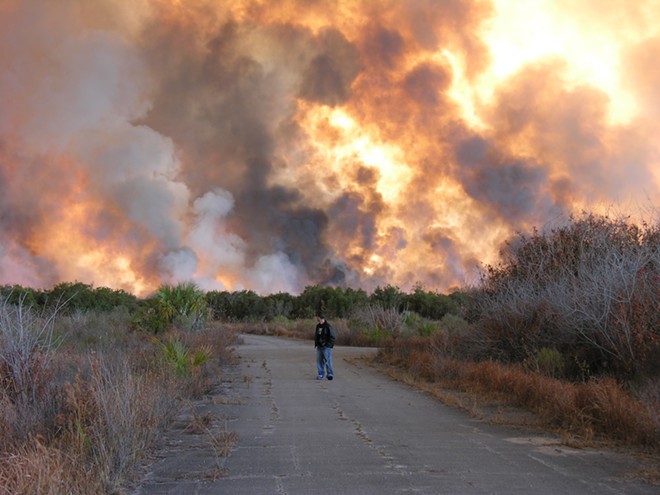 You might have noticed the Orlando "winter" this year was a constant fluctuation of temperatures. Now Central Florida is already gearing up for its first heatwave.

Despite this year's temperatures not being record highs, they are higher than usual and global climate change is still the driving force behind the humidity. The higher-than-average temps are likely to continue through the rest of 2020. While it's no surprise that Florida retains some of its warmth during the winter months, the reasons for the rapidly rising average temperatures, and the implications for the future, are highly problematic.

A recent study from the Center for Climate and Energy Solution (C2ES) warns that "over the past decade, daily record temperatures have occurred twice as often as record lows across the continental United States." Without a major change, Florida temperatures may continue to rise to life-threatening highs, creating unsustainable living conditions for Florida’s native plants and animals. People won't enjoy it much either.

As reported by the Pew Research Center, "Most Americans today (62 percent) say that climate change is affecting their local community either 'a great deal' or 'some.'"

Locally, Mark Gunter, professor of International Relations at Rollins College, is working to measure the effects of climate change in Florida.

"It is true more Americans than ever better understand the threats our changing climate presents, even as President Trump continues to cast doubt on its science," Gunter writes on his website. "That said, these same Americans remain unwilling to invest in climate change mitigation."

He added, citing a 2019 poll by the Associated Press, that "almost 70 percent of Americans declare they would not pay as little as $10 a month to reduce rising temperatures."

David Godwin, the director of the Southern Fire Exchange, part of the University of Florida, says the enormous brushfires afflicting Australia provide plenty of warning signs for Floridians, who face our own flammable conditions.

"Almost 70 percent of Americans declare they would not pay as little as $10 a month to reduce rising temperatures." tweet this
"We also live in a place where fire is a real part of the natural environment," Godwin said in a release from UF. "Just like hurricanes, when it comes to wildfires, preparedness is key."

"Prescribed fire is the most effective and efficient tool for managing the accumulation of vegetative fuels that feed wildfires," said Godwin. "The Australian fires are occurring in their summer months during a period of extreme drought and heat. In Florida, a localized or regional drought can develop over a relatively short period of time almost any month of the year. Being prepared for wildfire should be considered a year-round effort for Florida forest managers and citizens."

The global rise in temperatures and dramatic changes in weather are happening in less time than humans typically take to act politically. In Florida, elected officials are finally starting to take the crisis more seriously.

Democratic state Rep. Anna Eskamani introduced a bill called "State Renewable Energy Goals," HB 97, which would eventually require all electricity used in Florida to be generated from renewable sources by the year 2050.

She told Florida Politics, "Florida should be a leader in climate change, not just because we have the best potential for solar energy, but also because we are feeling that impact in an extreme way."

Democratic lawmakers aren't the only ones concerned. This year has seen an increase in the number of elected Republicans finally saying the words "climate change" – and deciding to act on it.

Governor Ron DeSantis put forth a detailed environmental plan for the 2020 legislative session, which includes setting up a statewide office to address sea-level rise, creating more electric-vehicle charging stations, and a 50 percent increase on fines against people and companies that illegally dump raw sewage or damage coral reefs. His plan is noticeably less ambitious than Democratic plans, but that still hasn't made it easy for DeSantis to gather support.

He definitely needs to keep trying. A Florida Senate staff analysis noted that Southeast Florida is projected to witness a sea-level rise from 1 to nearly 3 feet over the next 40 years, and a Tampa Bay advisory panel estimated waters in that region could go up 1 to 2.5 feet in 30 years.

"In the U.S., sea level rise and flooding threaten an estimated $1 trillion in coastal real estate value, and analyses estimate that there is a chance Florida could lose more than $300 billion in property value by 2100," the staff analysis said.

As hotter temperatures combine with daily flooding in South Florida, and noticeably warmer winters heat up into unbearably hot summers, the gradual grind of global climate change has taken one giant leap closer to home.