Arms extended, Orlando Commissioner Patty Sheehan stood in front of the masses gathered for the Women's March Orlando 2020 on the steps of City Hall, spreading out fabric designed to look like butterfly wings.

"Excuse me, I was busy boxing out foolishness," said the city's first openly gay commissioner, referring to a group of counter-demonstrators waving signs condemning abortion and getting in heated back-and-forths with Women's March participants. A group of people, including Sheehan, formed a circle around the aggressive anti-abortionists, spreading their arms to unfurl their fabric butterfly wings and locking hands.

Most of the third Orlando iteration of the march organized by the Orange County Chapter of the National Organization for Women followed this theme of seeking out, circling and eradicating hatred in its many forms. It was the latest protest on behalf of women and femmes after the inaugural Women’s March on the day after Donald Trump’s inauguration.

Intersectionality was clearly the priority for the event's speakers, who dove into passionate diatribes against the scourge of epidemic levels of violence against Black trans women, or the needs of those surviving natural disasters in the U.S. territory of Puerto Rico, or the moral imperative to uncage children and enact humanely welcoming immigration, as often as they discussed consent and reproductive rights.

"Hold the door," said Nicolette Springer to the crowd, and asked that everyone take a moment at the beginning of every day to ponder how they use their privilege. A group from Hope Community Center, an Orlando organization providing immigration advice, made their way to the lip of the plaza in front of City Hall. Springer asked them to come to the front. 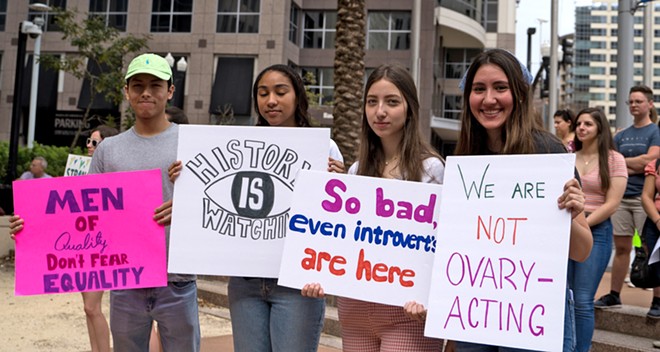 Cynthia Harris, a Black woman running to represent Florida House District 46 covering neighborhoods including Parramore and Pine Hills, spoke at the event. She emphasized that the Women's Suffrage moment secured voting rights for women with the ratification of the 19th amendment in 1919 – but that Black women couldn't vote until the Voting Rights Act passed in 1965.

"We have to do a hostile takeover," said Harris to Orlando Weekly, describing how Black women can make their voices heard.

Many speakers, some white, bailed from the Women's March in Los Angeles in solidarity with the local Black Lives Matter chapter who voiced concern that the mainly white women organizers were boxing out Black voices. Harris said that was not the case with the march in Orlando. She said when she went to Florida NOW organizers about speaking, they made sure that her voice was heard.

The majority of the people in attendance were white. But there was plenty of diversity.

As many speakers emphasized the notion that a better, more just nation for all begins with helping the most disadvantaged, the two other points of priority for speakers and those in attendance were women's bodily autonomy and electing a replacement for Trump. There were Planned Parenthood representatives and staffers from various campaigns offering to register people to vote.

Among the speakers were state Rep. Amy Mercado and Rep. Anna Eskamani, the first Iranian American to be elected to the Florida House; House District 43 candidate Tamika Lyles, who if elected, would be the first woman and first Black woman to hold that seat; and Florida Senate District 5 candidate Melina Barratt, the first openly transgender woman to run for state senate.

After listening to speakers, participants marched to Lake Eola and took a lap, delivering chants and waving signs for gawking and cheering passersby.

"Women's rights are being trampled," said Debbie Deland, 64, who came from the MetroWest neighborhood of Orlando.

"Everybody's rights are being trampled," said 58-year-old Ocoee resident Karen Riveland, piggybacking off her fellow marcher as they made their way around the lake. Chants of "Hey-hey, ho-ho, Donald Trump has got to go," rang in the background. "I think we can build our nation back up if we help the people on the lowest rungs."

High school activist Abby Fussell, 18, began heading up the issue of decriminalizing sex work after beginning a project on the matter at Tavares High School. Disappointed with how little she saw reports directly engage with them, Fussell reached out to speak with sex workers herself. She says the most common theme "is that decriminalization is the most important thing to end violence against sex workers and to end rape culture."

"This is why we need change," said Elaine Danzig, 59, sitting next to her marriage companion of 42 years, Bobbie Yvonne Danzig, 62. "We have 19 grandchildren and I want there to be a better future for them."