Former Florida GOP Chair says, under new Trump immigration rule, he 'would not have been allowed to stay in America' 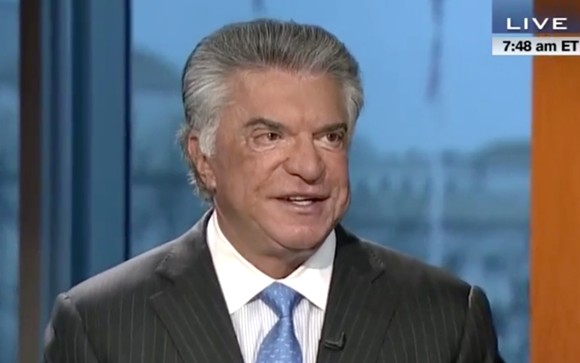 Al Cardenas, a former chairman of the Florida Republican Party and regular Trump critic, responded to today’s 5-4 ruling from the U.S. Supreme Court – which makes it harder for poor, legal immigrants to receive green cards – by saying he wouldn’t have been allowed to stay in America.

The ruling, which was originally pushed by White House senior advisor and white nationalist whisperer Stephen Miller, granted the Trump administration’s previous request to expand its ability to refuse green cards or visas for legal immigrants determined to be a "public charge," or dependent on public assistance, like Medicaid, food stamps or housing assistance.

“Sadly, I would not have been allowed to stay in America, prior to 1966, under this wealth test,” tweeted Cardenas Monday afternoon.


Unlike Florida’s current “brazenly anti-immigrant” GOP chair, Cardenas has been a regular critic of Donald Trump, referring to the president in the past as “despicable” and “social poison."

But Cardenas, who served two terms as chairman of the Republican Party of Florida, wasn’t the only vocal critic of today’s decision by the Supreme Court. Terri Rizzo, the Florida Democratic Party Chairman, responded by calling the ruling by calling it "xenophobic."

“Today’s U.S. Supreme Court decision does not reflect our American values but instead reinforces the xenophobic and anti-immigrant agenda pursued by this administration," said Rizzo in a statement. "Florida has offered refuge to many immigrants who have fled their countries, leaving everything behind, including people fleeing from dictatorships in Latin America. This decision is just a wealth test for immigrants and closes the door to thousands of immigrants who will contribute to our state. The Supreme Court is at stake in 2020, and this decision is a chilling reminder of why Donald Trump and his extreme agenda must be voted out in November.”

Human rights advocates have also called the ruling a racially motivated “wealth test” and discriminatory. "The Supreme Court's decision will further marginalize immigrant communities and will inevitably create a socioeconomic hierarchy in our immigration system," said CAIR Government Affairs Director Robert McCaw. "The Trump administration's policy could quite literally kill people by making them too afraid to seek life-saving medical care, and the Supreme Court seems to agree such a cruel system is acceptable."

Of course, it’s hard to argue that the rule isn’t racist when a known racist, Stephen Miller, literally wrote the proposal. Miller, you may remember, was recently caught by the Southern Poverty Law Center pushing white nationalist talking points on staffers at the hyper-conservative website Breitbart. In emails obtained by the SPLC, Miller sent links from the white nationalist website VDARE to Breitbart employees and recommended writers read The Camp of the Saints, which is a French novel popular among neo-Nazis about the “white genocide” myth.

So, yeah, maybe keeping legal immigrants out of the U.S. because they might use social programs they’re legally allowed to use is in fact racist and against the core principles literally written on the Statue of Liberty. Maybe a better saying at the base of the statue would be: “Give me your tired, your poor, your huddled masses yearning to breathe free, unless, of course, they need food stamps.”

Today’s ruling comes after federal judges blocked the rules before they were slated to take effect last October. However, lower courts are expected to hear lawsuits on the public charges in the near future, so it’s possible the Supreme Court will review this issue again, reports Politico.