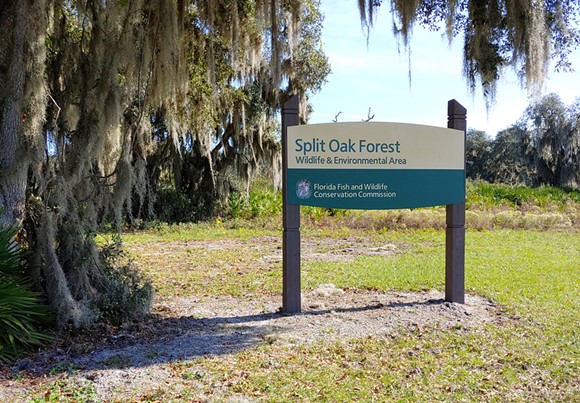 The plan to extend Osceola Parkway into Split Oak Forest has been approved by the Central Florida Expressway Authority, Osceola County, and Orange County.


Vice Mayor and District 5 Orange County Commissioner Emily Bonilla, at the Jan. 28 meeting, said she wants to revoke the county's approval for the toll road, which would bisect one of Orlando's last remaining forests.

Take a look at Orange County’s Split Oak Forest, before it’s destroyed by a new highway
By Dave Plotkin
Blogs

The plan, which awaits state review, is not a done deal. Either way, Bonilla told the rest of the Board that Orange County should reverse its December approval. She told the Florida Communities Trust, the state agency tasked with reviewing the plan, noted the proposal was filed under the wrong administrative code and that the county must resubmit the plan.

Because of the error, Bonilla told Orange commissioners that the county should hear a motion on the reversal of its approval. The rest of the commission agreed (a decision we're sure was definitely not influenced by the public outcry). The motion to rescind Orange County's approval of the highway will be presented at the Feb. 11 meeting.

The nine-mile extension through the pristine conservation lands of Split Oak, billed by proponents as an effort to ease traffic on Orlando's congested roadways, is to connect the Osceola Parkway toll road from State Road 417.

Local environmentalists have been battling the extension for as long as planning began for the highway over three years ago. Orange County potentially rescinding its approval will be a celebrated step back in a process that critics have said was rushed following the approval blitz in December, when Central Florida Expressway Authority, Osceola County and Orange County each approved the plan within a six-day span in December.

The Friends of Split Oak, the grass-roots group leading the charge to defend the land against construction, of roads or anything else, have a membership event at Castle Church Brewery on Saturday, Feb. 1.