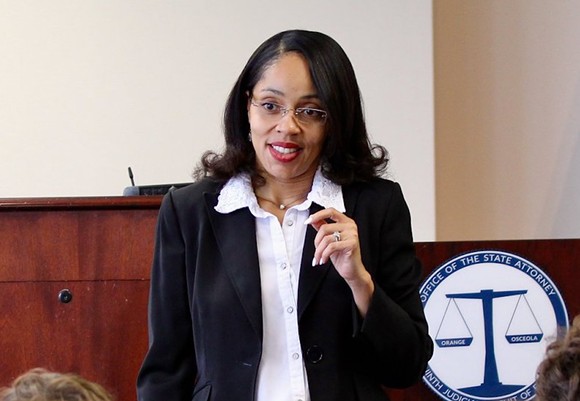 Ayala has been caught up in a dispute with Osceola County Sheriff Russ Gibson over her decision to not file criminal charges against two suspects in the October murder of Nicole Montalvo. Montalvo, a 33-year-old mother, was dismembered and her remains were found on two properties in Osceola County.

In the executive order, DeSantis said Attorney General Ashley Moody’s Office of Statewide Prosecutor found that based on the available evidence in the case, criminal charges “could be filed” against Christopher Otero-Rivera and Angel Rivera. DeSantis said in the executive order that Gibson believed Ayala’s “opposition to the death penalty has interfered with the appropriate pursuit of homicide charges.”

Gibson asked DeSantis to reassign the case to a different state attorney “to ensure that justice is pursued,” the executive order said. The governor reassigned the case to Ocala-area State Attorney Brad King.

DeSantis said charges “could be filed” against Christopher Otero-Rivera and Angel Rivera for the murder of Nicole Montalvo. tweet this
This is not the first time Ayala has been yanked from a murder case. In March 2017, former Gov. Rick Scott removed her from handling capital cases, which were reassigned to King. Ayala challenged the decision, but the Florida Supreme Court backed Scott.

Since then, she has announced she will not run for re-election in 2020, saying in a video posted on Facebook that “after the Florida Supreme Court’s decision on the death penalty, it became abundantly clear to me that death-penalty law in the state of Florida is in direct conflict with my view and my vision for the administration of justice.”

DeSantis did not take questions from reporters when announcing Ayala would be removed from the Montalvo case.