Agriculture Commissioner Nikki Fried’s office would have to replace stickers that display her smiling face on gas pumps by mid-September, under a House budget proposal.

The directive is tied to the House’s proposed $91.37 billion budget that was released Thursday. The budget also would require placing in reserves more than $19.7 million for other programs until plans are offered to replace the stickers, a process that Fried’s spokesman said is already underway.

The issue, which isn’t in the Senate’s budget outline, comes after a decision last year by the Republican-dominated Legislature to limit what could be shown on gas-pump inspection stickers posted by the Department of Agriculture and Consumer Services.

Fried is the only Democrat elected statewide, and stickers placed on pumps after she took office last year included a picture of her.

The House’s new budget proposal includes a provision that says a portion of money for the department would be put in “reserve until the department submits a plan to the Legislative Budget Commission for removing stickers affixed by the department to petroleum fuel tanks.”

Fred Piccolo, a spokesman for House Speaker Jose Oliva, R-Miami Lakes, said the House is taking the steps because Fried didn’t carry out the Legislature’s directive last year to replace the stickers that included her picture.

“The Legislature made it clear last session that the placing of a likeness of oneself on official inspection materials was unseemly, self-promoting and contrary to taxpayer interests,” Piccolo said in an email. “Commissioner (Fried) chose to ignore that directive. The House in 2020 is reiterating last year’s requirement and exercising our constitutional prerogative to decide what is and is not funded.”

Fried's office spent $5,000 for 120,000 inspection stickers. tweet this
But Franco Ripple, a spokesman for the Fried, called the House proposal “outrageous” and contended that shifting money to reserves over the issue would endanger a variety of consumer protections.

“It jeopardizes active criminal investigations, 61,000 lab analyses, almost 9,000 fair ride inspections, and the handling of nearly 400,000 consumer inquiries and complaints, over gas pump stickers that are already being replaced,” Ripple said. “Because of this (budget) proviso language, the jobs of 284 hardworking state employees could be at risk —- perhaps indefinitely.”

The clash came days after Fried decried as a partisan “power grab” an effort backed by all but one member of the House Agriculture & Natural Resources Appropriations to relocate the Office of Energy from her department to Gov. Ron DeSantis’ administration. 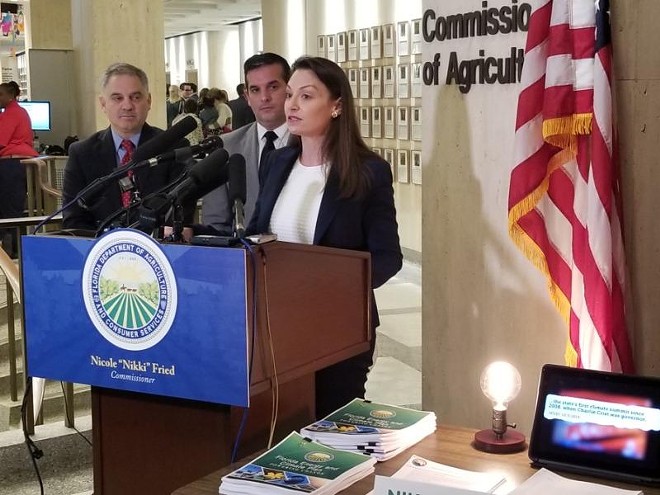 The fight over the stickers has festered for more than a year, since her office started to replace stickers that had been placed on pumps when Republican Adam Putnam was the agriculture commissioner.

The new stickers went up as pumps were checked for illegal “skimmer” devices intended to steal credit card information.

At least part of the concern was that the stickers with Fried’s picture were being used to gain free political exposure for a re-election bid or a run for higher office in 2022.

Under Putnam, the stickers featured the department logo, along with a code intended to direct consumers to an online help site to express concerns about fraud.

While the budget last year dictated changes that would remove her picture, Fried’s office took that as a prohibition on buying more of the bright yellow, green and blue stickers, but not to stop using them.

Her office had spent $5,000 for 120,000 inspection stickers. Most were in place by the time the budget for the current fiscal year went into effect on July 1.

Last year, Fried said the stickers were about accountability. In addition to Fried’s face, the stickers say, “inspected and approved for accuracy,” along with her name and a consumer assistance web address and phone number.

Franco said new stickers are already being attached to pumps across the state.

The new design includes the department’s logo, the commissioner’s name and contact information below a statement of “Approved for Accuracy,” all atop a background in blue shades that depict ranch and farm images.