Something big is headed to Universal Orlando's CityWalk. This is what we think it is

While much of the focus at Universal Orlando has been on their south campus and its highly anticipated, multi-billion-dollar Epic Universe theme park, that doesn’t mean the rest of the resort isn’t getting plenty of attention too. CityWalk, the resort’s dining and retail district, is about to get one of its most significant updates since it opened more than two decades ago.

When CityWalk launched, the hope was the district would compete against Downtown Disney, now known as Disney Springs. Plans included a mix of third-party restaurants, retail offerings and some nightclubs, but with only a handful of retail stores, the area never really became a shopping destination. As many of the existing retail and third-party dining venue leases have come up for renewal, Universal has opted to replace them with new concepts, many of them their own. These include NBC Sports Grill & Grill replacing NASCAR Café and Emeril's Orlando being replaced by Bigfire.

Now, one of the last remaining blocks of the original CityWalk is being brought into the new vision. Over the past few weeks, multiple retail stores have closed, including Fresh Produce and the large surf shop Island Clothing Co. P!Q and Fossil, both of which opened later at CityWalk, are also expected to close in the coming weeks. Fresh Produce was remodeled in 2015. Permits have already been filed with the city confirming four retail stores will be combined into one large venue.

Rumors of a 'Saturday Night Live'-themed comedy club and a Universal-branded escape room attraction have both popped back up in recent weeks. tweet this
It’s believed that the large new store may be home to an updated Universal Store. While the current store was remodeled just six years ago, the resort has since seen an impressive increase in attendance, and will soon be increased by the new franchises at Epic Universe, like Nintendo and How to Train Your Dragon. The larger store would be able to include areas for these brands, while also providing the ability for NBCUniversal to feature various franchises such as upcoming films or television series. As Orlando’s Super Nintendo World won’t open until 2023, a preview center for Epic Universe may open in the interim. 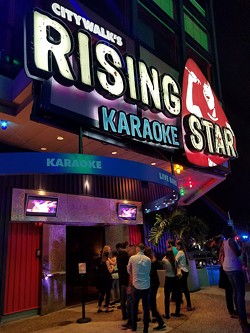 The expanded Universal Store is just one of many projects rumored to be in the works for CityWalk. The current Universal Store shares a back-of-house area with Rising Star and the Hot Dog Hall of Fame. While details are still slim, there has been some indication the Rising Star karaoke bar may close and, with the Universal Store space below it, may be turned into a single venue. Rumors of a Saturday Night Live-themed comedy club and a Universal-branded escape room attraction have both popped back up in recent weeks. Both have been rumored since at least 2017, but new trademark documents by Universal seem to indicate they are moving forward with at least the escape room concept. Some have pointed to the shared kitchen space the building has as a possible sign of a new fast-casual concept, though there is little else to back up this speculation.

Bubba Gump’s, Red Coconut Club, and the food court with Panda Express, Moe’s and BK Whopper Bar are also expected to close, or see updates, within the coming years.

As with most projects at Universal Orlando, no official announcements are expected from the resort until the project is well underway, but whatever is in the works at the former Island Clothing Co. and Fresh Produce, it is expected to be officially announced by this summer.