The International Noise Conference in Miami has by now become such a major annual institution in the underground that the pre-INC shows in Orlando – curated by Lakeland noise insider Dylan Houser (of Formaldehydra) since 2015 – have themselves become yearly institutions. Besides capitalizing on the rich influx of noise pilgrims to showcase out-of-town talent passing through (this year from as far away as North Carolina, Illinois, Pennsylvania and New Jersey), the pre-INC shows are worthwhile happenings because the homegrown weirdos also come out and rally around the freak flag to represent.

Once again, this year’s Orlando pre-INC show made full synergy of outsider Mills 50 spots Uncle Lou’s and Grumpy’s – two venues that, from logistics on down to attitude, are absolutely ideal for this event. From the range on display at this latest show, the sonic offerings are getting increasingly expansive in the noise underground.

As usual, this congress of experimental music is a near-bottomless buffet of strangeness, with cryptic concepts and techniques so unorthodox that it would consume my word count in pure description alone. But the actual sounds – from the pure noise of New Jersey’s Gluck Gluck on out to the ambient, after-hours house beats of Orlando’s Saturn Valley – represented a panoply of mutant ideas that test the bounds of noise music.

Among the most salient acts I caught was former Miamian and now current Philadelphian Street Rat, who shot blasts of white-hot noise from a hazmat suit rigged with pedals and other sound devices in a berserk, full-body performance. 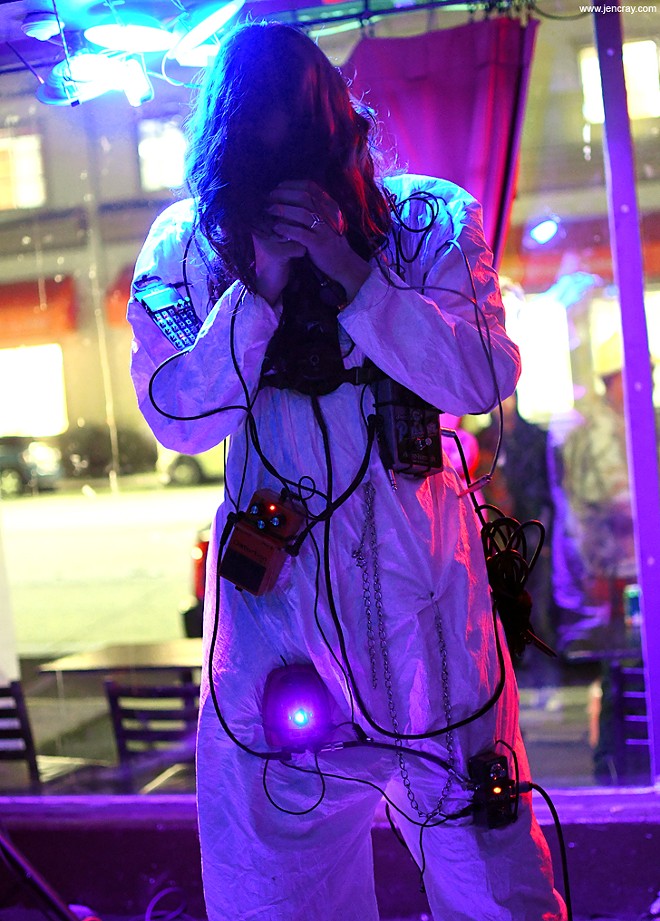 By far, the biggest broadside came from pan-Florida free-jazz syndicate Bongus. Although the amorphous improvisation group tends to feature lots of stars from the state’s musical fringe, this particular showing was especially maximal for the occasion in both credentials and sheer manpower.

While the horn section of their opening set for Eugene Chadbourne back in December was a two-man affair, they came this time as a marauding brass gang armed with saxes, trumpets and trombone. And it was an enveloping, amoebic performance that spread all around the room and infiltrated the crowd.

Bringing welcome playfulness to the proceedings was Cabo Boing. Although it does its own thing, this solo project of Yip-Yip’s Brian Esser wiggles with the same electro-elastic oddity that made Yip-Yip Orlando’s own warped Devo for so many years.

In all, the Orlando pre-INC showcase was a full festival’s worth of action compressed into a one-night blur of insanity. And like its boundary-pushing mother event in Miami, it was a triumph of circuits, ethos and unchained creativity.