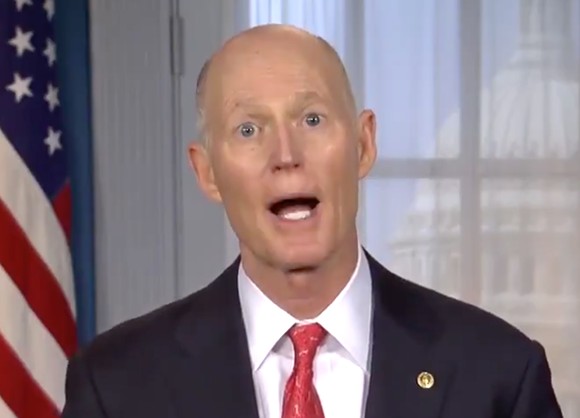 Not satisfied with the acquittal of President Donald Trump on charges of abusing power and obstructing Congress, Sen. Rick Scott today announced he's pushing for a constitutional amendment to make it harder to impeach the president.

"It should be harder – much harder – for either political party to take the process our Founders created as a last resort against a tyrannical leader and use it instead as a tool for the tyranny of a political majority," said Scott.

Specifically, he's talking about requiring a "super-majority" of three-fifths of the U.S. House to impeach a president, or 60 percent. That would require at least 261 "yes" votes out of 435 total members. There were 230 votes in the House to impeach Trump on Dec. 18. By contrast, presidents Andrew Johnson and Bill Clinton were impeached by majorities of about 73 percent and 53 percent, respectively.

Trump was acquitted by the Senate on Wednesday, with only 48 votes to convict on the charge of abuse of power, and 47 votes to convict for obstruction of Congress. Except for one vote by Sen. Mitt Romney to convict, the votes were down party lines.

It would take two-thirds of the House and Senate, as well as ratification by 38 U.S. states. tweet this
"Our country should never again have to suffer from this partisan hackery," Scott said in a statement. "An act as divisive as impeachment must have bipartisan backing and overwhelming support."

Conservative outlets like Fox News and National Review are excitedly pouncing on the news, but constitutional amendments are notoriously difficult to accomplish. In order to pass, it would take two-thirds of the House and Senate, as well as ratification by 38 U.S. states.

Undeterred by the slim chances, Scott is pressing the issue. "The Democrats used the impeachment process as a tool to hurt President Trump, regardless of the outcome of the Senate trial. It's a dangerous precedent and the process has to change," he said.

Scott previously released video ads during the impeachment trial in the Senate, in which he claimed the process was holding him and 99 colleagues "hostage."

From the outset of his Senate campaign, the then-governor touted a constitutional amendment to limit the terms of U.S. House and Senate members. His latest proposal to further protect the sitting president might gain more traction with Congress than attempts to limit their own terms, but this initiative stands an almost equal chance of going absolutely anywhere.