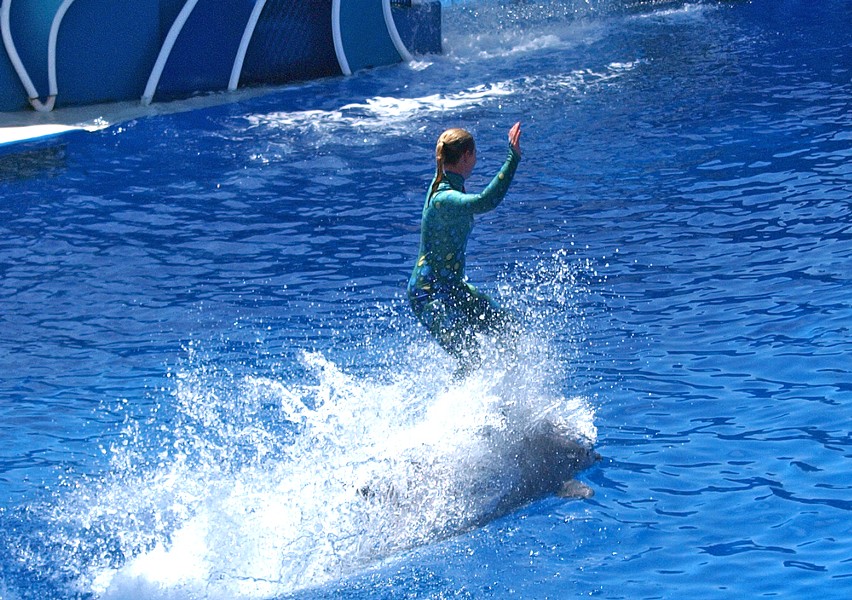 SeaWorld confirmed they will be phasing out "dolphin surfing" from their shows entirely, and PETA, the People for the Ethical Treatment of Animals, is taking credit for putting the pressure on.

In August, PETA filed an abuse complaint with the U.S. Department of Agriculture about the practice, and included five "damnable photos," showing visible wounds on dolphin's noses, which the organization attributed to dolphins lifting trainers up with their faces. The park's most recent developments suggest a shift from animal stunt shows to thrill rides, and by December, SeaWorld ended its orca shows in Orlando and SanDiego. But that's not the only way PETA has influence over SeaWorld.

Unbeknownst to many, PETA actually owns stock in SeaWorld, holding shares as of 2013. The purchase became possible when SeaWorld offered up 20 million shares of common stock in an initial public offering, and PETA jumped on it, buying the minimum number of shares necessary to have a say in annual shareholder meetings and to submit resolutions.

Unbeknownst to many, PETA actually owns stock in SeaWorld. click to tweet
In December, months after filing the USDA complaint, PETA submitted a shareholder proposal to SeaWorld, requesting they cease the practice of having trainers ride live dolphins as a circus-style attraction.

Originally, SeaWorld executives argued that PETA was working against them, that they do a lot to protect animals, and that the performance of riding the dolphins did not hurt the animals. But a veterinary report noted the practice was both physically and emotionally damaging to the animals, leaving them wounded and scarred.

On Wednesday, PETA withdrew its proposal, after SeaWorld announced in a filing they would be phasing out the dolphin stunts.

In a press release, PETA said that it hopes SeaWorld will continue to act further by completely phasing out the use of live animals in their shows. They have a website, SeaWorldOfHurt.com, dedicated to making their case for cruelty-free attractions at the parks.