Have you ever seen the Baby Trump balloon outside of Trump events? Or the giant inflatable rat standing in symbolic protest, set up by trade unions? Well, the inflatable protest game just got more dramatic, and for all the right reasons.

A group of Greenpeace activists and citizens brought a 15-foot tall "plastic monster" to the state capitol in Tallahassee on Tuesday, to spread awareness and draw attention to the plague of plastic pollution.

While Florida's favorite local grocery store, Publix, continues to show little cooperation with efforts to eliminate single-use plastic, Greenpeace is traveling through the state to highlight Publix's lack of attention to the issue. 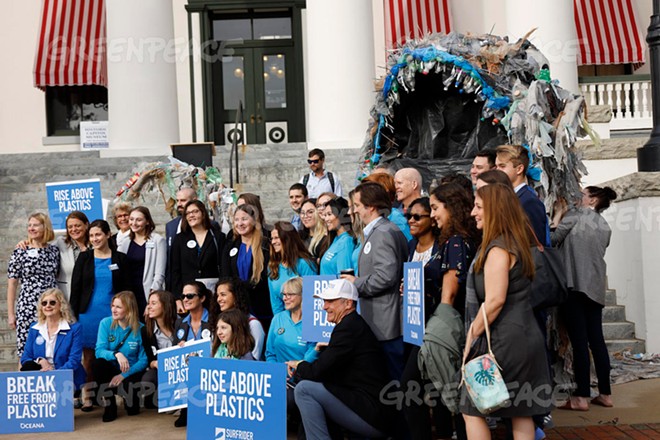 Publix continues to maintain single-use plastic within their facilities, as well as financially support laws that prevent Florida's cities and counties from implementing a ban on plastic bags and other single-use items. When Greenpeace surveyed supermarket retailers nationwide, quantifying efforts to eliminate single-use plastics, Publix ranked 15 out of 20 retailers, scoring 7.1 out of a possible 100 points.

While our well-documented love of pub-subs may endure, our love for our planet should outrank the temporary convenience of plastic bags. According to an estimate by Australia's Ocean Crusaders, a waterways cleaning organization, shoppers worldwide are using approximately 500 billion single-use plastic bags per year. This statistic translates to about a million bags used every minute across the globe, or 150 bags a year for every person on earth.

"Publix continues to demonstrate that it cares more about maintaining its ability to use cheap plastics than answering its customers," said Greenpeace plastic campaigner David Pinsky in a statement. "Publix needs to get out of the way and get on the right side of history by ending its reliance on single-use plastic."

Publix says it's plastic reduction program has saved more than 6 billion plastic bags, and it offers recycling bings outside the stores (though much recycled waste is "stored," or buried indefinitely, until it can be purchased for recycling. Publix's recycling statement notes their bags "use 71 percent less energy to produce than paper bags."

Greenpeace teamed up with groups at the state capitol to push legislators to advocate for communities's right to ban single-use plastic, one of many home rule preemptions passed by the state legislature in recent years.

If bringing a 15-foot plastic monster to the capitol wasn't enough, Greenpeace later moved their grey "trash-goblin" to a local store in Tallahassee, where advocates protested Publix's use of plastics.

Greenpeace plans on touring the Sunshine State with the monster, with appearances expected in Orlando, St. Petersburg and Gainesville.

Next time you step into your local Publix, wave that reusable bag loud and proud, and maybe ask why everyone doesn't have one.