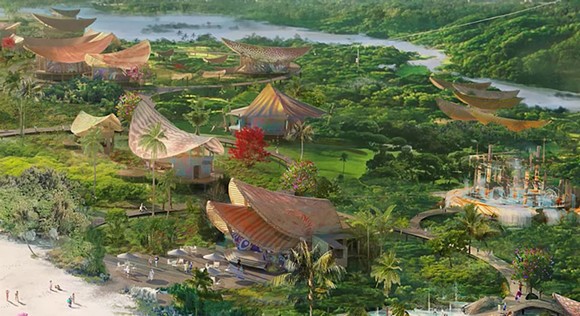 Disney Cruise Line has now published a website revealing new details on its upcoming second private port-of-call, in the works since 2018.

The Celebration-based cruise line has been slow in announcing what it plans to do with the historic and ecologically important peninsula that it acquired in Eleuthera. At the D23 Expo in August of last year, some very early concept art for the nature-focused day resort, which at that time was billed as an “adventure camp,” was released. Now, conceptual site plans and more details are out.

Disney is taking a lesson out of the playbook they used in Hawaii, where they used local lore, artisans, and construction styles to inspire their DVC resort. In the Bahamas, Disney has already been purchasing local artwork for the new resort, and early concept art shows Caribbean-inspired buildings.

Imagineer Joe Rohde, who oversaw the development of Disney’s Animal Kingdom and the Hawaiian DVC resort, is leading the development of the new private port. His ability to connect high-traffic, tourist-focused areas with calming nature-heavy designs is likely a reason he was put in charge of the new project. Joe Rohde has explained that the new resort, to be known as Lighthouse Point, is "unlike any other, not a replica of some old Bahamian town, not a pirate fantasy, but a dreamlike fantasy of adventure by the sea, where art and nature combine with Disney magic to create a destination that can only exist in one place.”

Rohde also noted the unique location of the new day resort. and the important mix of cultures the Bahamas is home to.

"Eleuthera in particular is home to many artists, and we will be working with painters, sculptors, writers, storytellers, musicians, weavers and artists of every kind, much like we did with Aulani in Hawaii.”

In the newly published site plan, there are buildings along the shoreline, with a high-ropes-style adventure park located further inland. Only 20 percent of the property is being developed. Large swaths of the land are set aside as conservation areas, and the historic sites that dot the landscape remain open to the general public.

More than 190 acres of the 751-acre site are being donated to the government, many of the centuries-old historical sites are included in the 190 acres are access roads to those culturally significant sites. A public beach is also included in the areas being donated back to the government. Four large salt ponds found on the site are being preserved. The entire project is estimated to cost between $250 million and $400 million. 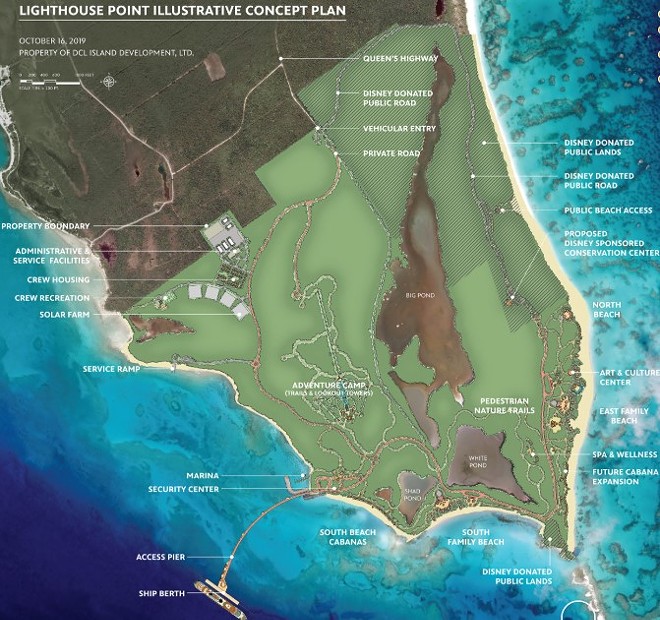 Cruisers will disembark along an access pier, before passing through a security center near a small marina. From there, an adventure camp that includes ziplines and a high-ropes course will be on one side, with a family beach area and cabanas on the right. Pedestrian nature trails will link to the opposite side of the peninsula, where a spa and wellness center, art and culture center, a conservation center, and more beach access can be found. Away from guest areas is an administrative center that includes fourteen cabins for crew housing, a crew recreation area with a soccer field, volleyball court, and basketball court, and a large solar farm. At least 30 percent of the energy demand for the project will come from renewable sources, such as the solar farm.

Notably missing from the concept site plan is any mention of a DVC resort. In 2019, Disney sent a survey to select Vacation Club members, asking about their interest in potential future locations for a DVC resort. Included in the list were multiple ski lodge locations, three locations in Asia, Anaheim, numerous large cities including San Francisco and New York, and Lighthouse Point. From the list, the only place so far to be confirmed is Anaheim, where a small DVC presence already exists. The new plans, filed in late 2019, call for a DVC tower to be built at the Disneyland Hotel.

On the recently published Lighthouse Point website, it notes that "the destination will create sustainable economic opportunities for Bahamians, protect and sustain the natural beauty of the site, celebrate culture, and help strengthen the community in Eleuthera." According to Disney Cruise Line, the Lighthouse Point project should provide at least 120 construction jobs during its development, and then at least 150 "well-paying" permanent jobs once it opens. Priority will be given to Bahamian entertainers, artisans, and tour operators. 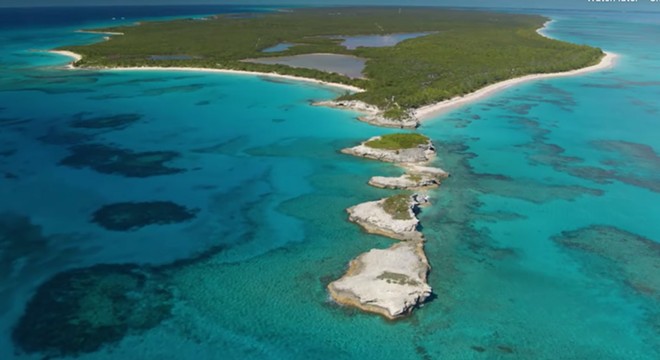 Still, this is not enough for some who are concerned about the impact that the large cruise ships and thousands of tourists will have upon the fragile ecosystem. A petition demanding that Disney not develop the site has garnered more than 287,000 signatures and multiple residents have spoken out against the project.