New patent filing reveals something that could shake up Walt Disney World, literally

Walt Disney World could be shaking things up, according to a patent filed by its parent company with U.S. Patent and Trademark Office in October. The new invention would create momentary earthquakes under the feet of park guests, whenever a character stomped or pounded on the ground.

The patent application is called "Haptic Floor System with Quake Plate Assemblies Producing Large Vibration Effects," and it appears to show how an actor or on-screen character could trigger the effect.

A drawing included in the filing shows a person pounding on the floor with what appear to be Hulk hands, since they have four knuckles (unlike fellow Marvel superhero the Thing, who has three).

An accelerometer worn by an actor could let the device know when and where it was being struck, with the vibration effects being modulated, much like the haptic feedback settings on a cell phone screen. 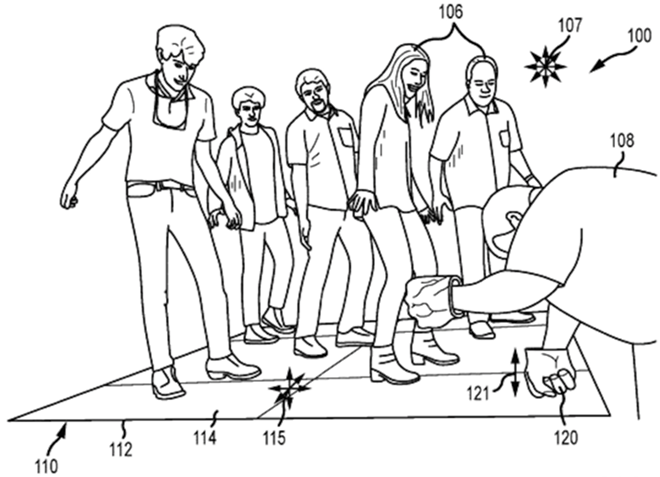 "There are many applications where it is desirable to provide people with new and surprising entertainment experiences," says the patent application. "For example, there is a demand for a physical world environment to be designed and built that can selectively provide people in that environment with haptic feedback in the form of a vibrating floor or ground."

The patent, filed by Disney Enterprises, Inc. of Burbank, California, notes the invention could simulate a stampeding heard of animals, dinosaurs or zombie soldiers. The system would use plates or panels, operating in coordination to localize the vibrations.

"The special effect delivered by the haptic floor system," says the application, can create "ground trembling and vibrations similar to that felt in an earthquake or when a super strong fictional character strikes the floor nearby or a large animal or robot walks or runs by the person."

Orlando Business Journal reported the filing and spoke to a UCF assistant professor and expert on theme park and attractions, Carissa Baker, who said it makes sense for a company always striving to build ever bigger immersive experiences.

"Haptics have been emerging as an additional way to interact with guests. Vibrations, in particular, have been used in many attractions to increase the authenticity or add to the thrill of it," she said, pointing out the shaking floors of the elevators at Universal's Gringotts and the moving transports at Walt Disney World's Rise of the Resistance.

"These floor vibrations could be a reaction to a story element or just a background detail that enhances believability," she told OBJ. She also noted the vibration effects were inclusive of people with disabilities.

Disney is not commenting on the patent application. The Walt Disney World parks saw more than 58 million people come through their gates in 2019.
Stay on top of Orlando news and views. Sign up for our weekly Headlines newsletter.