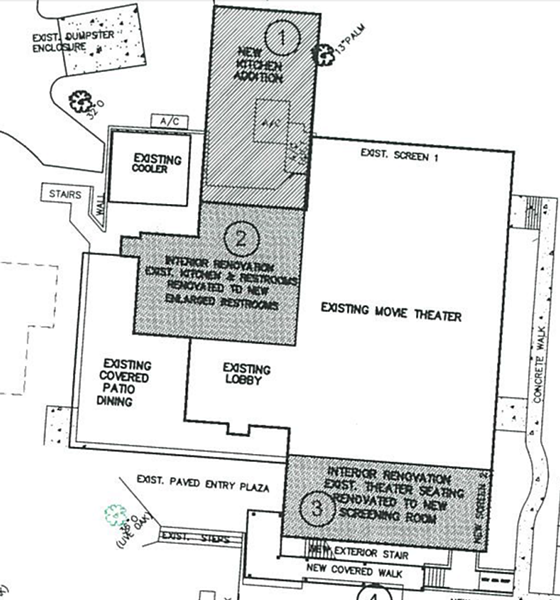 Maitland’s art-house theater surprisingly abandoned their ambitious “Enzian Forever” expansion in 2018 because of parking issues. However, the cinema is now seeking to add an additional screen by walling off the back of the existing auditorium, in addition to renovating its kitchen and restrooms.

This change would technically be an improvement rather than an expansion because it would use most of the building’s existing structural “footprint.” It would also not boost indoor capacity beyond the allowable 250 (though the theater currently limits its attendance to about 220).

The plan, therefore, would not require additional parking or an approval process on the scale of Enzian Forever. Indeed, the Maitland City Council has already given the go-ahead, on a 3-1 vote at a meeting on Feb. 10. (That vote overturned a previous decision, on Dec. 18, that claimed the plans did not amount to a “minor change” and would require a lengthier approval process and public hearings.)

However, this doesn’t represent a final approval, according to Robert Sargent, Maitland’s public information officer. Instead, it means that no further involvement of the City Council or the Planning and Zoning Commission is required. The next step is a simple approval from city staff, contingent upon the construction plans meeting the scope of a “minor change.” That approval could happen in as little as a month, according to Sargent, though the Enzian has provided no construction timetable.

“Renovation plans have been approved as a minor change by Maitland's City Council, and in light of this, Enzian staff will continue to work with city staff on the project moving forward,” says Janie Pope, Enzian’s director of development and public relations.

The Enzian has not yet shared precisely how it intends to partition its existing theater and how it intends to achieve the ceiling height necessary for a second movie screen. Plans filed with the City of Maitland call for the following:

"1. Increase of structure by 1,000 square feet to provide approximately 450 square feet for purposes of kitchen efficiency and to improve the men's and women's bathrooms. The exterior of the addition provides for no openings and is totally contained within the city's setback area;
2. Separating 50 of the 250 permitted seats into a second “intimate” theater to allow for staggered starting times. Seat count is the same as presently permitted;
3. Addition of a weather canopy to protect public from inclement weather when standing in line;
4. Upgrading handicapped parking area to comply with current standards and adding one additional handicapped parking space; and
5. Moving interior stairwell to office from inside the existing structure to outside the existing structure."

The document also states, “The cumulative effect of these changes do not result in the reasonable likelihood of adverse impact to adjacent properties.”

It’s unclear whether a 4K digital projector and 35mm reel-to-reel film projector are part of the project. That 35mm projector, which programmers have long wanted, would make it easier to secure film prints. It would also allow the Enzian to better compete with Alamo Drafthouse, which is expected to open a cinema later this year in south Orlando, on Daryl Carter Parkway, near Vineland Premium Outlets. That theater is expected to have a reel-to-reel 35mm projector, in addition to multiple 4K projectors. (The Enzian currently has a 2K digital projector and a platter-system film projector, which is not as popular with studios as the reel-to-reel system.)

The Enzian has not said how much the project will cost or how it intends to pay for it, but the theater could use money left over from the $6.5 million Enzian Forever project. That plan called for a new lobby, restrooms, offices and two additional screens, so this new plan is likely to be significantly less expensive. But it’s not clear how much of that money remains. (When Enzian Forever was canceled, the theater offered donors their money back upon request, but many chose to let Enzian keep the donations contingent upon the funds being used for future renovations, according to David Schillhammer, former Enzian executive director.)