THIS LITTLE UNDERGROUND
Bl_ank at the In-Between Series, Feb. 17

Downtown experimental music serial the In-Between Series just kicked off its 2020 season with one of its most intense chapters yet. Capitalizing on the touring migration bonanza caused by Miami’s big annual International Noise Conference, the latest feature was Bl_ank. This audiovisual noise percussion act is the solo project of Nashville artist William Hicks, a man who keeps collaborative company with cats from defining bands like the Flaming Lips and Deerhoof.

Going in, this was the only edition of the In-Between Series out of the many I’ve attended that not only offered but actively encouraged earplugs. A good omen if ever there was one. As was the full, standing-room gallery filled with the city’s noise freaks.

From behind a rig of drums, knobs, pedals, laptop and video projector, Bl_ank immediately snapped everyone to attention and quickly went about distinguishing himself as experimental but not necessarily arcane. Unlike many free-improvisation percussionists, he doesn’t just ride on a blur of chaos. Built into his rhythmic drives are open pockets for improvisation – where he proves as inventive as any free-jazz dynamo – but he is a master of control.

Even when the pounding, popping percussive energy hits fever pitch, he commands it like a seasoned jockey, channeling the force into discipline and purpose. Watching him bang out lock-tight breakbeats is to know what it’s like to see drum & bass executed live by an actual human.

See the range he covers in just this two-minute window:


Although drumming is Bl_ank’s forwardmost charge, it’s woven into an integrated tapestry with electronics and visuals. The electronic sounds pulsed, pierced and rose to smother in monolithic sheets of harsh noise. Behind him, video clips – triggered to follow his sonic movements – flashed in constant motion. The cumulative effect is proof positive that wild unpredictability and high-impact clarity need not be mutually exclusive. Word to that, and to earplugs.

And as often happens immediately after an In-Between Series show, there was an open audience Q&A. Like the performance itself, the Q&A was illuminating, yielding the revelation that the video aspect of the Bl_ank experience was urged by none other than Wayne Coyne. This is exactly why the Q&A exists. 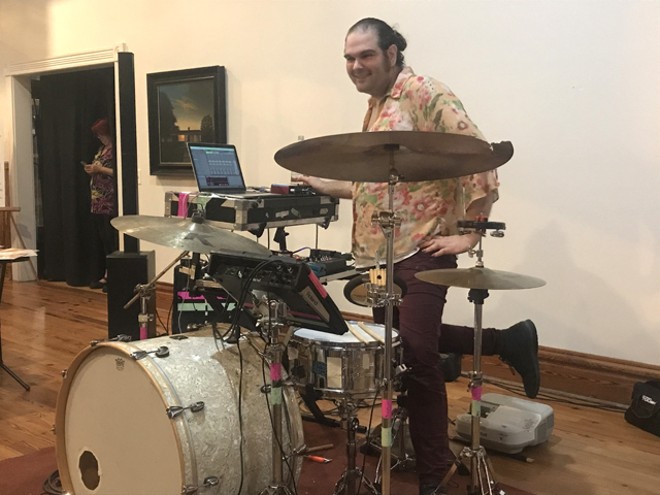