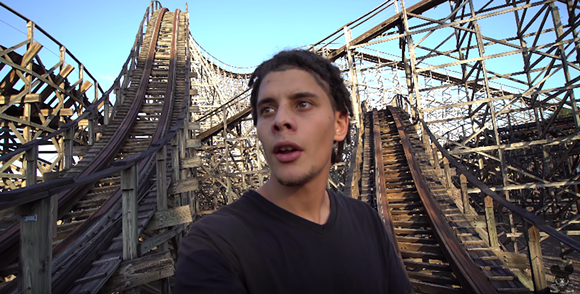 The videos, posted by content creator Matthew St. Cyr, feature him trespassing after hours into attractions at Walt Disney World and Universal Studios.

St. Cyr has explored several theme parks, including off-limits areas of Disney's Expedition Everest roller coaster at Animal Kingdom and a closed slide at Universal's Volcano Bay water park. Because of these videos, his YouTube channel has gained over 27,000 subscribers.

Theme parks aren't the only place St. Cyr has inspected on camera — he's also taken unauthorized tours inside an abandoned hospital, a funeral home and a mansion. In an interview with WKMG, St. Cyr said that he profits off the videos through ad revenue and donations from his subscribers. However, he did not disclose the exact amount he makes.

Court records show that St. Cyr has been arrested twice for trespassing. He is also being prosecuted for allegedly exploring off-limits areas at Busch Gardens Tampa Bay.

According to WKMG, St. Cyr has also received two trespass warnings on Disney property — one in July 2017 and the other in September that same year — and Disney security has been instructed to be on watch for him. St. Cyr has paid fees, served jail time and provided community service numerous times, due to his trespassing.

Disney and Universal officials are working with law enforcement to investigate St. Cyr. We've written before about theme park trespassers and the shadowy world of attraction interlopers.

"In any case where we find someone being intentionally reckless and promoting unsafe acts, we will bring in law enforcement to trespass them so they will no longer be allowed to come back to Walt Disney World," a Disney spokesperson told WKMG. A Universal spokesperson also told WKMG that St. Cyr's behavior is "dangerous, reckless and unlawful" and that the theme park will not tolerate it.

St. Cyr's content has garnered thousands of views and is being reviewed by Google, which acquired YouTube in 2006, and Patreon, a platform that allows content creators to receive donations from their supporters.

According to their community guidelines, Patreon does not allow funds to be collected for anything that facilitates harmful or illegal activities.

Despite investigations, St. Cyr told WKMG that he will continue to upload theme park content as well as a "big release" in the upcoming weeks.