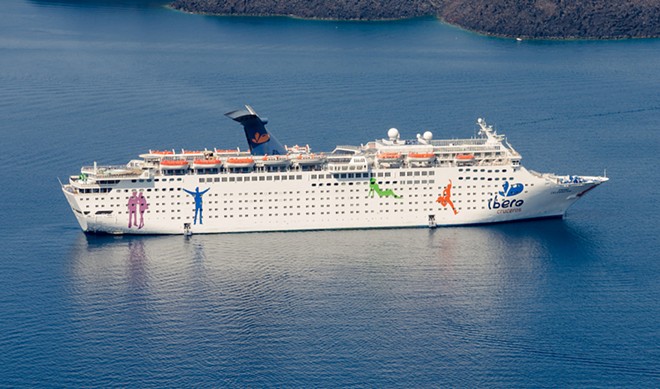 A cruise ship was captured on video tossing back and forth on Friday, as it battled strong winds to enter the Port of Palm Beach in Riviera Beach.

If the red tail of the ship, named Grand Celebration, looks familiar, it is indeed the distinctive trademark smokestack of Carnival ships. This ship was launched in 1986 as a Carnival cruiser, but switched branding in 2008 and 2014, to Carnival's subsidiary Ibero Cruises and then Costa Cruises, before finally being sold in 2014, to Bahamas Paradise Cruise Line. It's now one of that company's two ships.
PTZtv took down the video and asked us to remove the preview image.

The ship holds 1,496 passengers and 670 members – all of whom are undoubtedly happy to be on dry land right now in Palm Beach. No damage was reported from the incident, and it looks like some good piloting saved the day. It's far from the only scary incident for this vessel.

Just last month, the ship broke off its moorings while docked in Freeport, Bahamas, during a passing cyclone. Maritime blog Fleetmon reported the ship collided with its pier during the Jan. 3 incident, before being brought back by tugboats. It reportedly suffered only minor scratches.

In February of 1989, the ship, then called simply Celebration, collided with a Cuban cement freighter named Captain San Luis, breaking the freighter in half and sinking it in 13 minutes. Three of the freighter's crew members were lost to sea, including its captain. The freighter's electrical equipment was out at the time of crash, including its lights, steering and navigation systems. The Celebration stuck around to rescue 42 survivors.

No injuries were reported from Friday's incident, but there were probably more than a few spilled bloody marys.