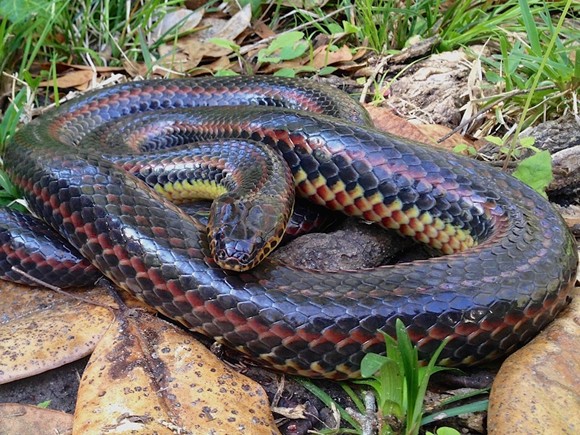 A hiker in the Ocala National Forest last week stumbled upon a rare sight, when they spotted and photographed a rainbow snake, also known as an "eel moccasin."

According to a Facebook post by the Florida Fish and Wildlife Conservation Commission's Wildlife Research Institute, the snakes are rarely seen, due to their "cryptic habits." In fact, the Florida Museum of Natural History confirmed it was the first sighting since 1969.

Unlike Florida's more ubiquitous Burmese pythons and iguanas, rainbow snakes (farancia erytrogramma) are native to Florida, specifically in the panhandle and northern areas, down through Central Florida via the St. John's River.

They are nonvenomous and great swimmers, "burrowing near creeks, lakes, marshes, and tidal mudflats," and acquired their nickname because they specialize in eating eels, according to FWC.
Stay on top of Orlando news and views. Sign up for our weekly Headlines newsletter.