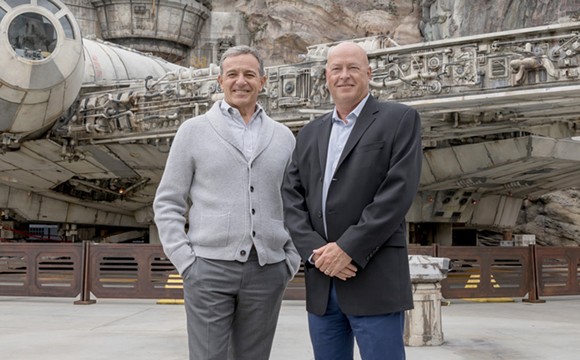 The company made the surprise announcement at around 4 p.m., during an investor relations call. Stockholder reaction was mixed, gauging by a dip in the company's stock price in the hours following the call.

"With the successful launch of Disney’s direct-to-consumer businesses and the integration of Twenty-First Century Fox well underway, I believe this is the optimal time to transition to a new CEO," Iger said in the press statement, the timing of which appeared to give little warning.

"The company has gotten larger," Iger said on the call. "I felt that I should be spending as much time as possible on the creative side of the business ... we identified Bob quite some time ago as a likely successor of mine."

Chapek, a 27-year veteran of the company, has been chair of the Disney Parks, Experiences and Products division since it was created in 2018, and was chair of Parks and Resorts before that, since 2015. He was a major force behind the new Star Wars: Galaxy's Edge attraction.

Curiously, outgoing CEO Iger's now-amended contract retains him as a full-time employee of the company, reporting "directly and exclusively" to the board of directors, while Chapek will continue reporting to Iger.

Iger is essentially setting aside the role of CEO for the more important responsibility of saving the company itself, as it grows ever larger and more dominant. As chairman of the board and the company, Iger is delegating his operations oversight to Chapek.

"Disney is an IP company," tweeted New York Times media reporter Edmund Lee on Tuesday, referring to the intellectual properties Disney has hovered up and leveraged across digital and in-person experiences throughout recent years. "Beloved characters from Disney, Pixar, Marvel, and Lucasfilm not only drive the box office and streaming, but the theme parks too."

"Mr. Chapek will also benefit from the guidance of one of the world’s most esteemed and successful business leaders, Bob Iger." tweet this
That means Disney – which creates toys, movies, TV and steaming series, cruise lines and theme parks, to name a few – will need to continue acquiring characters and brands, and squeezing every profitable drop out of every pixel.

The news also means Kevin Mayer, Disney's chairman of direct-to-consumer and international operations, did not get the job, meaning he will still oversee divisions like Hulu and Disney+. Mayer is in charge of signing deals, while Chapek is considered the more experienced day-to-day operator.

Our own Ken Storey was listening in on the call today and noticed there were no questions asked about the Parks and Products division. Following the news, Chapek reiterated multiple times that he's continuing the vision Iger laid out.

Iger himself described their new roles, as Chapek "delves deeper into Disney’s multifaceted global businesses and operations, while I continue to focus on the Company’s creative endeavors."

"Bob's role as new creative chief has faint echoes of Walt Disney," said the Times' Lee, reminding Florida historians of the great lengths Disney's founder took to secure everything from favorable land prices to compliant (or nonexistent) government regulators. The concept of Iger as a modern-day (though term-limited) Walt Disney means he also must acquire properties of enduring value, before others recognize their full worth.

"After consideration of internal and external candidates, we unanimously elected Bob Chapek as the next CEO of The Walt Disney Company, said Susan Arnold, independent Lead Director of the Disney board.

"Mr. Chapek will also benefit from the guidance of one of the world’s most esteemed and successful business leaders, Bob Iger."