Theater review: The 'Mean Girls' musical is more 'fetch' than we expected 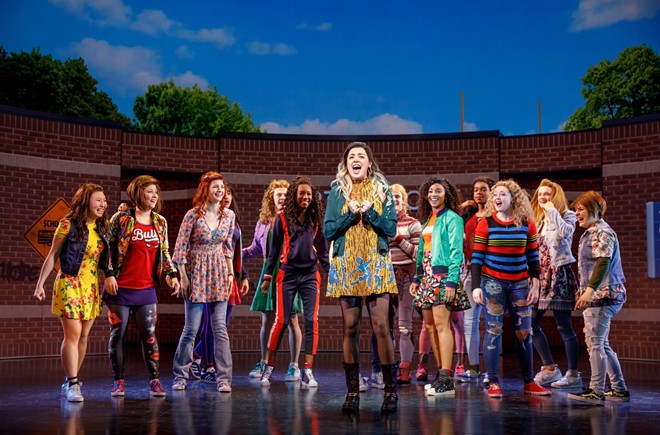 Just when I was about to spearhead a Change.org petition drive demanding a permanent moratorium on all movie-based Broadway musicals, along comes a show like Mean Girls that makes me reconsider (if not outright reject) my revulsion towards the genre.

While the original 2004 film didn’t achieve the iconic heights of a Heathers or Fast Times at Ridgemont High, Mean Girls still holds up after a decade and a half as the definitive high school comedy of the early aughts, thanks largely to breakout performances from a post-Disney/pre-rehab Lindsay Lohan and her young co-stars, as well as a sharp script written by Tina Fey. The 2018 Broadway adaptation, whose Equity tour is playing at Orlando’s Dr. Phillips Center through Sunday, features a book by Fey that faithfully follows her screenplay’s storyline, with some subtle but smart updates for Instagram era.

Unlike some other screen-to-stage translations, Fey’s play retains virtually all of the quotable quips Mean Girls film fans will want to hear (after all these years, “fetch” is still not happening), while emphasizing the messages of feminine solidarity and online empathy that they may need to hear. Her witty words almost make up for the fact that composer’s Jeff Richmond’s pop-pastiche tunes are mostly unmemorable (with a couple exceptions, like the catchy “Revenge Party”), and Nell Benjamin’s rapid-fire lyrics are largely indecipherable in the mouths of the exuberant but inarticulate ensemble.

Wade does a fine job capturing Lohan’s awkward, quirky charm, and Faith is fabulously boo-able as Cady’s best frenemy, but it is Huffman who repeatedly steals the show, leading dazzling tap-dance numbers that bring the spirit of Busby Berkeley into the school cafetorium. A tip of the hat also goes to Gaelen Gilliland, who plays all the adult females (including the Tina Fey, Ana Gasteyer and Amy Poehler parts) and manages to make each woman funny in a distinct fashion.

Let’s cut to the chase: Mean Girls is no Les Miz, but for a lightweight teenage melodrama, this musical delivers loads of energetic eye candy, along with a life lesson or two. Credit for this show exceeding my low expectations goes primarily to Tony-nominated director/choreographer Casey Nicholaw, with a strong assist from scenic designer Scott Pask and video designers Finn Ross & Adam Young. Using minimal moving setpieces against a stage-spanning digital backdrop, Nicholaw orchestrates a seamless flow of cinematic transitions that continually push the action forward, creating a much tighter tempo than the recent Aladdin, which he also helmed. The results are a pretty good argument for the expanded use of virtual scenery on Broadway – or at least on Broadway tours – as well as the continued viability of raiding the video shelf for show ideas. Now, who else is up for The Breakfast Club: The Musical?