The consistent march of adding more intellectual properties into Epcot continued this month, with the opening of the new barbecue fast-casual restaurant in The American Adventure. Many were shocked to find out that the Regal Eagle Smokehouse featured Sam the Eagle from The Muppets.

First announced last June, it wasn’t until last month that Disney confirmed the addition of the Muppet character to the new smokehouse with no mention, or even hint, of an IP connection in any prior press release or blog post regarding the restaurant.

This has led some to point to Bob Chapek, who is known as a proponent of cross-promotions and using Disney franchises wherever possible. In an interview with well-respected Disney news site Laughing Place last May, Chapek defended his use of intellectual properties on nearly every single new attraction across Disney Parks.

"A lot of times people say, 'Why does everything have to have a franchise orientation?' said Chapek. "Because that's our barrier to entry. Because if any of our competitors had our intellectual property, guess what? They would be doing the exact same thing we're doing, but they don't have it. We do. So we're going to build it."

At the time of the interview with Laughing Place Chapek served as the Chairman of the Disney Parks, Experiences and Products division but has since, in an abrupt unexpected move by the company, been promoted to CEO of The Walt Disney Company. In a phone call with investors discussing the abrupt change in leadership, Chapek pointed to the numerous acquisitions that former CEO Bob Iger made during his tenure, indicating that moving forward he plans to leverage the properties associated with those acquisitions.

"Why does everything have to have a franchise orientation? Because that's our barrier to entry. Because if any of our competitors had our intellectual property ... they would be doing the exact same thing." tweet this
In speaking with CNBC shortly after announcing the new leadership change, Chapek stated, "right now, the course that Bob [Iger] has laid is one that we fully we intend to follow and one that I think will pay dividends for our shareholders for years to come."

At Epcot, this type of focus on intellectual property linked investments has come at the expense of much of the more adult-oriented, educational-style experiences the park was once known for. While some argue the park never intended for characters to be in it, early concepts for Alice in Wonderland and Pinocchio attractions, in the United Kingdom and Italy pavilions respectively, negate this common misconception, though the park did open with barely any characters. 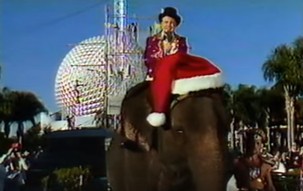 Within a few years though, Mickey and the gang were quickly added to the park, as was a short-lived circus that had elephants marching around Future World. Thankfully the elephants are long gone, but the slow march of adding ever more intellectual properties to the park seems to be a given with multiple new IP-driven attractions now in the works for it.

Over at the Magic Kingdom, a Muppets’ themed show in Liberty Square was quite popular with many fans, though unfortunately, it did close at the end of 2019. That live puppet show showed how the Muppets could be used in a refreshing new way and showed that Disney was interested in working with the property, despite recent box-office and television shortcomings. The surprising addition of Sam the Eagle at Epcot took many cues from PizzeRizzo that opened at Disney’s Hollywood Studios in late 2016. With this second take on a Muppets themed dining venue so far being much more popular than PizzeRizzo, it seems like Disney is slowly figuring out how to accurately present one its more popular originally third-party properties.

Now there are rumors that a team within Imagineering has been tasked to review other possible ways to integrate the Muppets into upcoming attractions at the world expo style park.

While Phase One of Epcot’s multi-billion-dollar rehab is readying to open within the next year, there are still multiple large-scale projects in the works around the park. One of the yet to be announced but well-known upcoming projects is a complete redo of the Imagination Pavilion. Speculation of Pixar’s Inside Out coming to the pavilion has dated back since the film first came out five years ago.

There are rumors that a team within Imagineering has been tasked to review other possible ways to integrate the Muppets into upcoming attractions. tweet this
More recently, TheVisionarySoul, an active user on the WDWMagic forums who is known for their accurate reports of upcoming Disney World projects, is reporting that alongside Inside Out is a second possibility for the pavilion featuring the Muppets.


“There ARE competing concepts for this pavilion. The interesting ones are based on Inside Out (yes, it's real) and strangely... Muppets. Yes, the idea of Muppet Labs taking over the pavilion to explore Imagination (and moving Muppet Vision 3D there somehow) has been pitched. In that version, it is revealed that "Figment" is a Muppet and was created by Muppet Labs. I know this sounds like something a high schooler thought up, but I can assure you it's a real concept that was floated around.”


This isn’t the first time The Muppets have been in the area currently known as Future World. As part of Disney’s Living Character Initiative, an interactive “free-roaming show” called Muppet Mobile Lab was used temporarily in Future World. The rocket-ship-like vehicle balanced on a Segway platform and featured an animatronic Dr. Bunsen Honeydew with his assistant, Beaker. Honeydew and Beaker interacted with guests via a system similar to ones found in Monsters, Inc. Laugh Floor and Turtle Talk with Crush, both of which were also part of the Living Character Initiative. 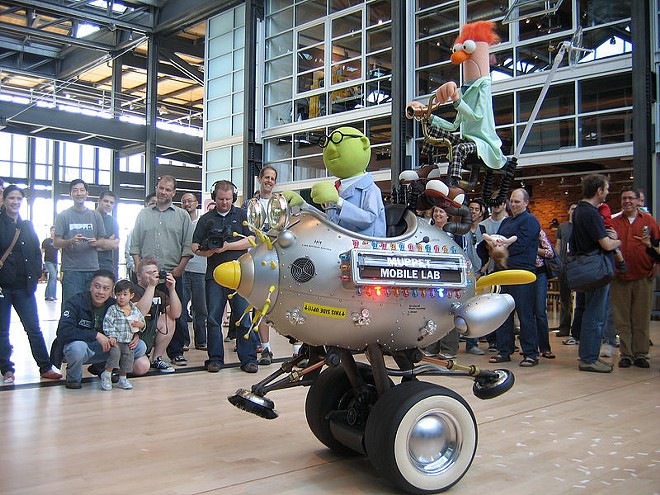 While popular, the Muppet Mobile Lab didn’t last long in the parks, but has popped up unannounced from time to time at Epcot. Today the Muppets Mobile Lab remains in storage backstage in Future World. If The Muppets do take over the Imagination Pavilion, it’s likely that the Mobile Lab would be frequently used within the pavilion area.

At Epcot, the Imagination Pavilion provides space for a dark ride, a theater attraction, and a possible play area. This would allow a smooth move for MuppetVision 3D. The movie attraction previously was also found at Disney’s California Adventure, with that version closing 2014 after a thirteen-year run. The theater at the Imagination Pavilion would need some basic updates to screen the movie, though it would be far less expensive than a brand new attraction.

Over at Disney’s Hollywood Studios, where both the MuppetVision 3D attraction and the PizzeRizzo restaurant are found, The Muppets have slowly seen their presence decrease. By moving Muppets from Hollywood Studios to Epcot, it opens up prime real estate at the studios park while helping address the lack of kid-friendly offerings at Epcot. The move to shift the Muppets to Epcot over Hollywood Studios aligns with other rumors of Pixar being mainly focused on Hollywood Studios in the coming years.

The good news for Epcot is that no matter what happens with the Imagination pavilion, one thing seems to be clear: the ever-popular Figment will remain. Both Figment, at least within Epcot itself, and The Muppets see consistently strong merchandise sales. Figment would very likely be much less present in the new attraction than he is today but would stay thanks in no small part to the cult-like following he has within the fan community. It’s no secret that while food and beverage sales at Epcot are among the highest per guest of any Disney park, merchandise sales lag behind most of the other parks. This is one reason why the park has embraced more film and television properties in recent years. With Star Wars, the Mickey Mouse dark ride, and multiple Pixar brands including Toy Story, not to mention Indiana Jones (at least for now), Hollywood Studios will have healthy park-specific merchandise offerings even if it loses The Muppets.

Both the rumored Pixar additions to Hollywood Studios and the potential Muppets addition to Epcot aren’t expected before 2024 at the earliest with most of the plans yet to gain any of the required executive approvals needed for them to move forward.

In the meantime, the parks are having to grapple with other concerns, including Coronavirus but while some projects have supposedly been scaled back or postponed while Disney tries to respond to two of its resorts being closed indefinitely, projects that are further out from debuting, like the Phase 3 and 4 ones at Epcot have yet to be impacted. In the interview with CNBC, Chapek explained, "The long term health of our business is really a function of our consumer demand for unbelievable storytelling and our product,"..."That affinity for the brand and our storytelling will way outlast any type of short term blip that we have from Coronavirus."