Mike Bloomberg a 'racist' and 'sexual predator,' according to signs stuck to his Florida campaign office windows 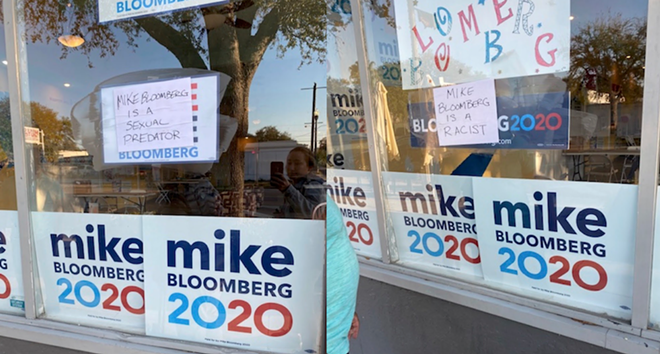 On Saturday night, Bloomberg’s office in St. Petersburg was reportedly defaced with signs that read “Mike Bloomberg is a sexual predator” and "Mike Bloomberg is a racist.” A pair of photos attached in a press release show two hastily written signs that appear to be glued or taped to the front window.

“This is the latest in a string of attacks against Mike Bloomberg 2020 offices around the country that need to end. While the goal may be to intimidate our volunteers and employees from supporting Mike and getting out the vote, it's not working,” said Florida State Director, Scott Kosanovich the press release. “Acts like this run opposite to our campaign. Mike Bloomberg is running for president to unite our country and party so that we can defeat Donald Trump. We will continue to carry Mike’s message and progressive vision for a better America to all of Florida.”

Apparently, this isn’t the first time people have pointed out some of Bloomberg’s worst qualities in the form of signs stuck to a window. The campaign says quite a few similar instances have occurred over the last month, like the recent one in Flint, Michigan where the phrase “Eat the Rich” was left on a sign stuck to their office’s front window, and in Ann Arbor where someone wrote “Corporate Pig.”

In Bloomberg’s press release, his campaign also hints that Bernie Sanders’ supporters are the likely culprits behind the string of incidents, citing no evidence other than Sanders often refers to Bloomberg as an “oligarch,” and is known to say things like rich people shouldn't buy their way into power.

Vandalism, if that’s what happened here, is unquestionably bad. Though, it’s worth pointing out that Creative Loafing Tampa Bay asked Bloomberg’s campaign if a police report was filed for any of these incidents, and it has not responded. More importantly, the fact that his campaign is even pointing out that someone is saying these things about him is an absolute self-own on Bloomberg's part.

So, since we’re now talking about all this at the expressed suggestion of Bloomberg’s campaign, let’s explore exactly how the billionaire is a “racist” and a “sexual predator,” as the signs suggest.

Like President Trump (his golfing buddy), Bloomberg also has some famously racist acts that pepper his timeline. It’s tough to choose, but perhaps the signs are referring to his incredibly racist and unconstitutional “stop-and-frisk” policy as mayor of New York City, which resulted in an estimated 5 million mostly Black and Latino men getting harassed and humiliated by police officers. Of course, he has since apologized for this policy, but only did so a few days before announcing his presidential run.

Speaking of racist policies, the signs could also be pointing to Bloomberg’s efforts to place NYC’s Muslim communities under surveillance following the events of 9/11, a policy that resulted in numerous lawsuits and an out of court settlement. Not only did the program target Muslims at their homes, schools and mosques, but it actually resulted in an undercover agent literally sneaking on a white water rafting trip with Muslim college students.

Last Thursday, Bloomberg addressed his Muslim surveillance policy on "PBS News Hour," arguing that it was the “right thing to do,” and “if they’d been another religion, we would have done the same thing.”

NYC’s current mayor Bill de Blasio wasn’t having any of this, and reacted to Bloomberg’s statement in a tweet, calling the policy “racist” and “counterproductive.”

“As the person who ended [Bloomberg’s] racist + counterproductive Muslim surveillance program, I will tell you what he won’t: it actually made us LESS SAFE,” tweeted de Blasio. “It bred resentment and distrust, just when we most needed to bring our police and our Muslim community together. Failure.”

And, of course, as a longtime businessman and mayor of New York City, Bloomberg has a well-documented history of sexist behavior that’s resulted in a seemingly never-ending pile of nondisclosure agreements. At the last debate, Elizabeth Warren famously brought to light a few of these instances, but last Sunday night yet another clip popped up during a "60 Minutes" segment, where viewers were reminded of the time Bloomberg said, “If women wanted to be appreciated for their brains, they’d go to the library instead of to Bloomingdale’s.”

Of course, all of this pales in comparison to a billionaire having to read a couple mean signs taped to his office window.