Orlando toll worker said she was fired for calling in sick 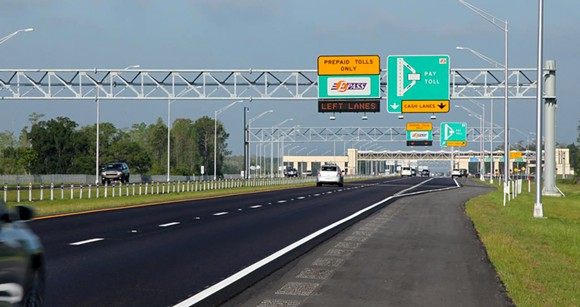 A toll worker stationed at a Central Florida Expressway Authority stop in Orlando says she was fired shortly after calling in sick. Virginia Allen, who worked at a northeast Orlando toll plaza on State Road 417, says she called in sick Thursday morning and received a text that afternoon from the staffing agency that hires toll workers for CFX.

In the text, says Allen, the reason she was fired was "attendance issues." But she maintains any absences in the year-and-a-half she worked at the toll plaza were few and justifiable. She says the firing was abrupt and shocked her.


“We care greatly about the health of our associates and take claims of discrimination very seriously," said Express Employment Professionals, the national staffing agency that has offices all over Florida and hires CFX toll workers, in a statement to Orlando Weekly. "Due to this being a personnel matter, we cannot comment any further on this issue.” CFX officials say they have no comment on contracted staff issues.

Toll work is especially susceptible to the passing of germs, which is a concern any time but especially now, given coronavirus fears. It involves handling money, exchanged from the hands of locals and the tens of thousands of visitors that make their way around Central Florida toll roads. Not only are workers susceptible to picking up passing bacteria but, if they are sick and come to work, they can potentially infect everyone who passes – as well as their co-workers in the confined toll boxes.

Still, with steady precaution, illness can be avoided, said Allen, who said she hasn't had a bad cold or the flu since she started work at the CFX toll.

Toll work involves handling money from the hands of locals and tens of thousands of visitors commuting through Central Florida. tweet this
Allen, 61, was already especially practiced at staying healthy. Her husband, Stephen, 54, weakened by the effects of throat cancer, is unable to work or help with most tasks at their mobile home in Deerwood. He has been in and out of the hospital, recently falling to around 105 pounds, and was put on a hospital feeding tube today.

"Every day for the last eight months, I've been coming home, not knowing if he'll be dead or alive," said Allen. "It's so stressful."

Though Allen admits being the sole breadwinner and caregiver for her husband has frazzled her and caused her to rush into work "a minute or so late" sometimes, she says she has had very few absences, with a good reason for each time.

Allen said she could think of two instances because of her car. One time her serpentine belt broke, stranding her for five hours and causing her to miss her shift. The other was a flat tire, which, after the road ranger fixed it, only caused her to be late, not miss her shift. She can think of a couple of times when she missed work to take her husband to the hospital. And she can think of two times she missed work, with doctor's notes.

Other than that, Allen says she never called in sick. She says that the Express staffing agency was aware of her husband's illness, even her own health episodes and, largely because she was a hardworking and reliable employee, was working with her as she dealt with health and home constraints. Allen even claims that she told her employers that she was considering applying for time off through the Family and Federal Leave Act, but was assured that she didn't need to, as the staffing agency would work with her.

Then, at the end of February, one of her toll coworkers came into work sick, sharing the tight space with Allen. It was another day of greeting and seeing all kinds of locals and travelers, a job Allen said she "loved." But on Thursday, Feb. 27, Allen said she became so sick she could barely talk. She says she called in sick at 8:44 a.m. for her 1:45 p.m. shift and received a text that afternoon telling her that her "assignment has been ended effective immediately."

Allen claims a supervisor vomited while on the job but was told they couldn't go home. tweet this
The Sunday before falling ill, Allen said she called into work minutes before a shift because she was running late after leaving her husband at the hospital for an afternoon shift. The next day, she said the staffing agency texted her telling her that she needs to call the toll plaza at least two hours before a shift if she is going to be late. Otherwise, read the text, which Allen shared with Orlando Weekly, there would be "disciplinary action."

Other than that, says Allen, there was no indication that she was at all in jeopardy of losing her job. "They terminated me just like that," she said. "I was in shock."

She does claim an environment in which people were encouraged to work through illness, including a supervisor who, Allen claims, vomited while on the job but was told they couldn't go home. Allen called working conditions "abusive." As an example of the culture, she says management hung signs urging staff to ask for bathroom breaks instead of urinating in toll plaza tunnels as a way to avoid asking for a break.

Allen says she does not want her job back and that she "can't work with these people." She is readying plans to file a lawsuit seeking wrongful termination and, if extra damage is found in her heart, damages. She plans to look for work once she heals from her cold, which has yet to subside.