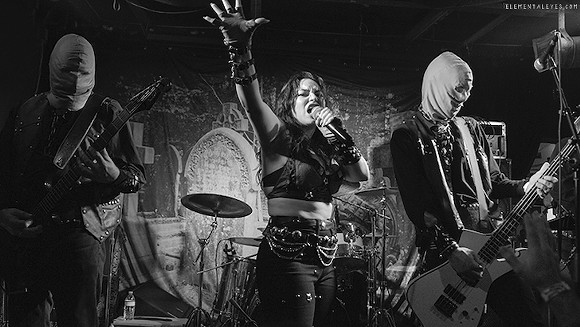 The coronavirus pandemic is having unbelievable impacts throughout all ares of public life here in Orlando, as in the rest of the world. Aside from the ever-present worries of health and a health-care system stretched to the breaking point, every day another hammer seems to fall on a different business, a favorite place to gather, a public space, a venue … with no end in sight. [As I write this piece, I've learned that I've been furloughed by the Orlando Weekly, driving the point even further home.]

In less than a week, the pandemic has set off seismic changes in our locals arts and music scene. Live music, in particular, in Central Florida has been dealt a seemingly lasting blow by the necessary steps of social distancing. Venues and bars have closed, a phalanx of talented bartenders, sound engineers and venue staff have been laid off, and musicians – both full- and part-time – are finding themselves without paying gigs or audiences. To say nothing of the national touring circuit being effectively over, indefinitely. How long will this go on?

"The human cost is much higher than most people assume." tweet this
To help us get some perspective on what has happened both nationally and locally to the music business just over the last six days, we turned to local concert promoter Pete Olen of Endoxa Booking. Olen books shows throughout Florida on a wide range of scale – from Uncle Lou's to the Abbey – and genre – hip-hop to metal to industrial to Froggy Fresh – and has been doing it for many years. All of these factors put him in a unique position of experience of the regional music scene. In our conversation, Olen's answers were candid and blunt, a sobering look at where the music community is at right now. Yet, he is working towards future shows, and in that, at least, we can find some hope of a return to loud normalcy.

Tell me about the day when all the sh*t hit the fan for you as a show promoter.
I don’t really remember the specific day. It has been a gradual process of shows canceling until, all of the sudden, everything disappeared. It was a bit shocking. I will say that most people I’ve dealt with about cancellations (e.g., musicians, agents, managers, club owners) have been amazingly accommodating, helpful, and patient. This is such a disastrous turn of events, so it’s a bit heartening to consider how everyone has dealt with it.

How bad are things exactly? How far out have shows you booked gotten canceled or postponed?
In short: it’s quite bad. Extremely bad. Disastrous. I’ve canceled everything in March, most shows in April (though some are holding on for the moment), and we’re starting to lose shows in May and June. The issue isn’t just the immediate concern of upcoming concerts, but looking at touring overall – there is somewhat of a domino effect here. Even if a tour is supposed to reach Florida in June, it might start in Canada or the Northwest in late April. Canceling the beginning of a tour, for example, generally wrecks the rest of it. Then, attempts to reschedule the tour slam up against shows that have already been locked in for later in the year. The repercussions for us (in terms of cancellations) are much more extensive than one might assume.

This is bigger than just a bunch of shows not happening. It's almost like a whole ecosystem or local industry collapsing. Can you talk a little bit about the broader human cost of this?
The human cost is much higher than most people assume. Tour cancellations are a bit difficult on the promoter side of things, but the negative consequences impacting myself are nothing compared to the impact on musicians, tour managers, sound engineers, bartenders, door staff, venue owners and a whole host of other people in the music industry (including music journalists and editors). While it’s obvious their livelihoods depend on concerts and events, not everyone knows how deeply this reaches into the year and into everyone’s lives. National tours cannot simply be rescheduled for next month; the process is fairly involved and depends upon a lot of factors outside of everyone’s control. Even if bars and venues reopen in a month, it will take much longer to start bringing larger concerts and events back to Florida. And this has a horrific impact on anyone working on concerts and live events.

What do you plan to do in the meantime? The club and bar closures pretty much quash anything for the time being …
Aside from refunding ticket sales, there isn’t much to be done. All things considered, we’re moving ahead as if business is normal (though it clearly is not). I’m trying to reschedule as many tours as possible, but there are a lot of moving parts to doing so. There are no live events planned for the near future.

"No matter how long we’re forced to cull live events, it will take even more time after that to get tours up and going." tweet this

How were you feeling during the last show (Voltaire at the Abbey: Friday, March 13) you hosted? Is there a particular band you really regret not being able to bring to town?
We were able to enjoy our last show because it wasn’t exactly clear how bad things were going to be at that moment. I thought we’d lose a few shows here and there, but it wasn’t certain that venues would be closing for 30 days. (I don’t think anyone was even talking about that as a realistic possibility). Honestly, this wasn’t a huge part of conversations on Friday. Really, things have drastically changed since then. I was looking forward to Life of Agony, Clan of Xymox, Tyr and others, many of which we’ve been working on for six months. One hopes they will return in late 2020 or 2021!

Do you see any sort of recovery in the near-term future? What does a recovery even look like?
I guess it depends on how you define “near-term future." I’m not an expert, so I cannot really tell how long we’re going to be forced to limit live events. No matter how long we’re forced to cull live events, it will take even more time after that to get tours up and going. One hopes that a recovered touring industry looks much the same as it did a week ago, but I don’t know if that will be the case.


– Due to the coronavirus (COVID-19) pandemic, all bars and nightclubs in Florida were closed on March 17 for 30 days. As of March 18, Central Florida restaurants are still open for takeout and delivery, and grocery stores are open during limited hours. Follow CDC guidelines and Orange County advisories on staying safe.