Some estimates put losses for Disney upwards of $350,000 per day due to coronavirus. The lack of sports programming alone is estimated to cost the company, which owns ESPN and ABC, $481 million in lost ad sales. With these types of losses, the company will be looking to cut expenses in the coming months and years.

Nationwide, the hotel industry is expecting losses that are six times more severe than those experienced in the months after 9/11. During that time, Disney halted many projects in the works across its resorts, so with this even more extreme downturn now quickly forming, there's no question some projects at Disney World are likely on the chopping block.

Epcot is in a unique position. While the park may be the last to reopen due to its complicated foreign worker programs and focus on Orlando-area annual passholders, many of the construction projects in the park are either wrapping up or are so necessary that they'll likely remain.

A local economic downturn is especially worrisome for Epcot, which relies heavily on locals using it like an outdoor food hall and landlocked booze cruise. tweet this
The Ratatouille dark ride and expansion to the France pavilion are nearly completed, as is the Space 220 restaurant. Both will likely open within a few weeks of the park's reopening. The Guardians of the Galaxy roller coaster is also quite far along in its development and should open by next year. The same is true for Harmonious, the park's new nighttime lagoon show.

The previously announced Spaceship Earth redo may now be postponed slightly. Still, the aging ride system, some of which is nearly 40 years old, will require significant maintenance in the coming years, so expect this project to move forward even if it is temporarily postponed. The same is true for the spine of Future World, where the Innoventions West buildings are being removed, to be replaced by a Festival Center. This new elevated building will host many upcharge offerings and special events, and the area around it is designed to address crowd flow issues that have plagued the park for years.

Less certain at Epcot are the yet to be announced projects, including the Mary Poppins attraction, the redo of Imagination, and the update to the Mexico boat ride. These may see their timelines pushed back or canceled altogether as the company looks to predict what the coming years will be like for the U.S. economy. A local economic downturn is especially worrisome for Epcot, which relies heavily on locals who use it like an outdoor food hall or landlocked booze cruise.

Magic Kingdom's TRON coaster, which is also wrapping up construction, should open on time, and the Castle refurb that began just days ahead of the construction halt should start as soon as workers are allowed back into the park. Other projects related to the 50th Anniversary, especially those that have yet to be announced, are expected to be cut. 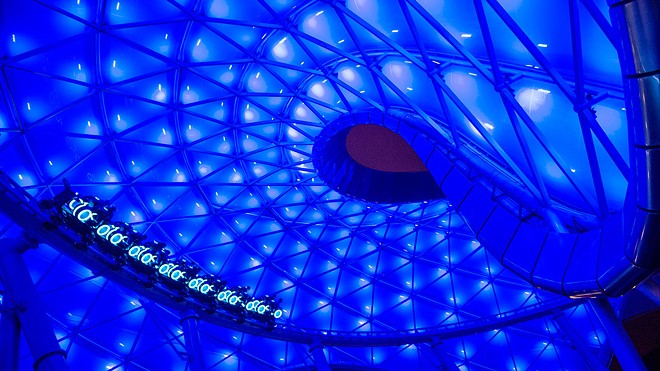 This is true across the resort, with many yet-to-be-announced projects in the Animal Kingdom, Hollywood Studios, and at all the hotels being put on the back burner, until the company gets a better handle on what to expect in the coming years.

Just like in past slowdowns, hotels are the most likely to see an impact from cost-cutting. This may include delaying construction and opening of the upcoming Reflections DVC resort but, according to those familiar with these early-stage talks, does not include a delay for the Star Wars hotel. According to these insiders, the thinking is that this project, more so than many others, would result in negative media coverage if it was officially delayed or postponed. The hotel is also much smaller than Reflections or other Disney World resorts, meaning that it may remain in high demand even during an economic recession. The yet-to-be-announced rollout of similar hotels at other Disney resorts around the world seems less certain.

For many, the delays and canceled projects at Disney World won't ever be noticed thanks to many of the projects that look to be postponed being ones that have yet to be officially announced. Unlike in 2002, when the Pop Century resort's second phase was abandoned midway through construction, this time Disney has projects that are much further along with their timelines or are forced to happen due to other issues, such as increasing maintenance cost. This means WDW will see plenty of new things continue to open in the coming months and years, just don't expect any significant new announcements until we all have a better grasp of what the next 18-36-month economic outlook will be.