Disney's Orlando parks have closed before, just not for the reasons many people think

When Disney announced last week that their U.S. and European parks would be joining their Asian counterparts in closing, in response to the unprecedented pandemic, many stated that this would only be the fourth time Disneyland has closed since opening in 1955. That resort has seen far fewer closures than the hurricane-prone Florida parks, but this will, in fact, be the fourteenth unscheduled closure for the California park.

At Walt Disney World in Orlando, the first unplanned closure in the park’s history came in September 1999, 28 years after the resort opened, when Hurricane Floyd, at the time a category 4 hurricane, was heading directly for the resort. Thankfully, Floyd turned course and just skirted along Central Florida’s coastline.

Less than two years later, the resort was abruptly closed again, and a reverse rope drop procedure was used to quickly evacuate the Florida parks on Sept. 11, 2001. Here is one place where many seem to find confusion. While the California parks never opened on 9/11, the ones in Florida were open for a few hours before closing due to security concerns.

In 2004, Disney World saw more closures as the triple threat of Hurricanes Charley, Frances and Jeanie struck Florida, though only the last two required full-day closures at the parks.

More hurricane-related closures occurred at Disney World in 2016 and 2017. At Walt Disney World, no event until this year saw the parks close for more than 48 hours.

In California, closures are less common but, ironically, weather-related ones were most common until the pandemic-related closings the park is now undergoing.

Jason Schultz is the leading expert on Disneyland closures. As an independent Disneyland historian and professional archivist, Schultz has been able to piece together Disneyland’s entire operating history. His 2011 book, Jason’s Disneyland Almanac, includes operating hours, weather forecasts, notable visitors, and other relevant information for every single day at the Disneyland resort since its opening in 1955.

Speaking to Orlando Weekly, Schultz explained one of the most frequent misnomers regarding Disneyland closures.

"The biggest piece of misinformation circulating as it pertains to Disneyland is that it closed because of the Northridge earthquake. I don't know where that came from. The earthquake occurred at 4:30 a.m. Disneyland was scheduled to open at 9 a.m. and a Park spokesman reported that it opened on schedule."

He goes to explained why so many people would believe that, "particularly now that it's been repeated in at least dozens of news articles. The earthquake was a big deal in Southern California. People may have memories of recent earthquakes where Disneyland has briefly evacuated attractions to evaluate them. So, it's very plausible. Just not accurate!" 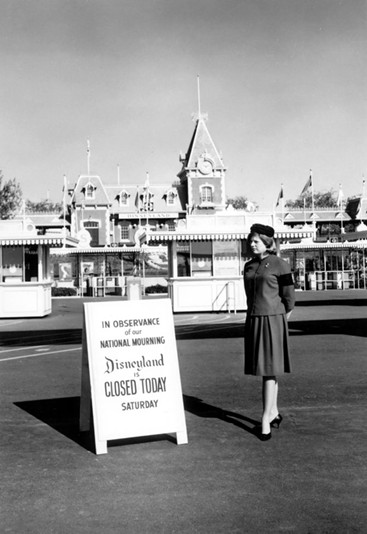 After nine rain-related closures, Disneyland saw its first non-weather-related closure on Nov. 23, 1963, for the National Day of Mourning following Kennedy’s assassination. That closure, or possibly the 9/11 ones, might be the closest to what we’re currently experiencing with attractions and businesses across the country being affected by it.

Two other weather-related closures occurred at Disneyland, in 1987 and 1992. The most recent closure occurred on May 4, 2005, when the Disneyland park was closed as part of a media celebration honoring its 50th Anniversary.

Disneyland was in the midst of its longest streak of consecutive days open, with more than 5,400 operational days, before the park closed earlier this month.

Globally, the longest unscheduled closure for a Disney park is the Tokyo resort when it was forced to close for five weeks in 2011, after the devastating March 11 earthquake and tsunami. The park’s reopening was viewed by many locals as a sign that life was slowly getting back to normal with some visitors bringing gifts, thank you notes, and other signs of appreciation to cast members when the park opened on April 15.

The gradual reopening of the Asian parks is being seen, however accurately, as a sign of normalcy returning. The same is true in the U.S., where many look to the Disney parks as a constant in an ever-changing world.

As Schultz explained, "the sign when you enter Disneyland [and WDW’s Magic Kingdom] says, 'Here you leave today... .' Since it opened, it has almost always served as a place of escape. With multiple generations having visited Disney Parks, it reminds people of family, friends, and fond memories."

Disney’s parks in Asia are now slowly reopening with the parks in France and the U.S. still in the midst of their longest closures to date. Currently, Orlando's Disney park is expected to reopen sometime in April or May.