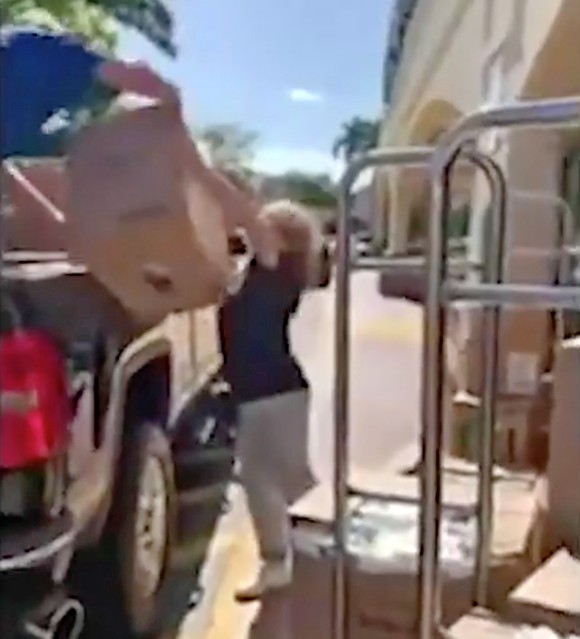 One thing is certain: The novel coronavirus pandemic has exposed our nation’s insatiable lust for toilet paper, and things are getting ugly.

The video, which went viral last weekend, was filmed at a Dollar Tree in Pompano Beach, and shows the unidentified woman and another man loading a black truck with an insane amount of paper goods.

"Look at this wonderful woman who just told me to f— myself and mind my own f-ing business, who just bought the entire store out of paper towels, toilet paper, so that nobody else can have any. It's really lovely," says the woman filming.

"I hope you're not, like, gonna go sell it to other people,” the camera handler adds. “Don't worry, you'll see her on the street corner selling it for double in a minute."

"Look at this wonderful woman who just told me to f— myself and mind my own f-ing business." tweet this
The woman filming then accuses the TP hoarder of being a Donald Trump supporter, to which the hoarder replies: "Donald Trump! Go Donald Trump!" The camerawoman then responds with "I knew it! Honey, I knew it! I knew it. I had you pegged right away."

The conversation then dissolves into petty insults. "So, which street corner should I go to buy from you?" the camerawoman asks. "The one you're a hooker on," replies the hoarder.

So this woman not only buys out a local Dollar Tree of every single box of paper towels, napkins, and toilet paper so that no one else can buy any, but caps it off with this:


A spokesperson for Dollar Tree released a statement saying that this particular store violated the company’s current rules on customer purchasing limits.

Meanwhile, stores like Publix and Target have put limits on high-demand items, like toilet paper and cleaning supplies.