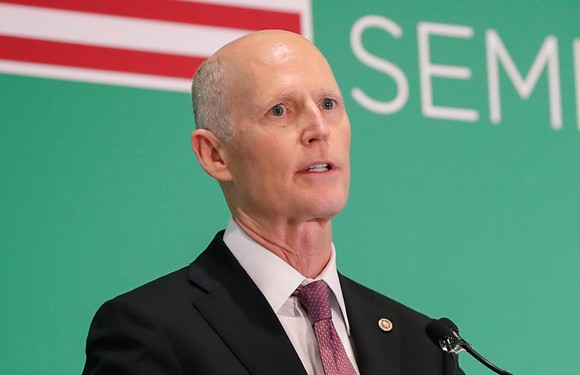 Florida Sen. Rick Scott, the former governor who basically reached into the state’s chest, ripped out the unemployment system while yelling “Kali Ma,” and lowered it into a lava pit, argued last night that increased unemployment benefits in the $2 trillion coronavirus relief package may encourage people to not go back to work and remain unemployed.

Scott’s concern was echoed by fellow Republicans like South Carolina Republican Sens. Lindsey Graham and Tim Scott, as well as Nebraska Sen. Ben Sasse, who all believed the bill’s $600 per week increase in unemployment benefits, on top of state benefits, could incentivize low-wage earners to not go back to work after all this blows over.

I support expanding the Unemployment Insurance program. It’s the best and quickest way to get money to people that need it most.

But we shouldn’t create a system where Unemployment Insurance benefits are higher than a salary. pic.twitter.com/VmrI6hdFU0


Of course, despite the criticism from Scott, the Senate ultimately passed the historic stimulus bill unanimously.

As the Orlando Sentinel pointed out last week, while Florida’s unemployment rate skyrockets to record highs, the state's current, and god awful unemployment benefit system ranks among the worst in the country, capping out at $275 a week and lasting only 12 weeks. You can thank Scott for both that and the website that barely works.

Meanwhile, Scott and his colleagues will now go on a three-week paid vacation.