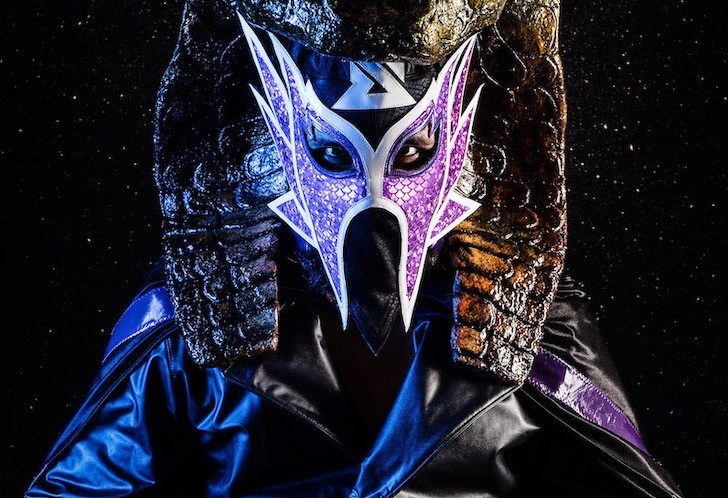 The big story in professional wrestling last week was that the WWE was moving their gigantic annual Wrestlemania event out of Tampa amid safety concerns due to the coronavirus pandemic. They instead taped it in the empty WWE Performance Center in Orlando. But there's a related story, in its own way just as big, that didn't get as much attention. Wrestlemania week in Tampa was to host a score of independent wrestling events from indie wrestling federations from all over the world. And in one fell swoop, every single one was canceled.

To make matters worse, suddenly every wrestling event anywhere, on any scale, was soon canceled too. Central Florida's pro wrestling scene has been experiencing a renaissance of late, with events seemingly ever week put on by the likes of creative new companies like Mayhem on Mills, Atomic Revolutionary Wrestling, No Peace Underground, Nerd Street Wrestling and more. That renaissance is now in very real danger of ending as – with all other areas of arts and entertainment – performers find themselves without paychecks, rings, audiences or even jobs.

One local wrestler impacted deeply by all of this is the enigmatic and masked Serpentico, whom you may recognize from the cover of our 2019 Best of Orlando issue. The high-flying, lucha libre-influenced performer has wrestled all around the country for groups big and small, including NXT, Impact and Ring of Honor. One particularly memorable match in Orlando for Mayhem on Mills found him teleporting with his opponent Teddy Stigma.

Orlando Weekly spoke with Serpentico over the weekend about the massive impact that the coronavirus pandemic is having on the wrestling industry locally and nationally. He broke down the economic impacts on independent wrestlers, shared his memories about how quickly Wrestlemania week fell apart, and offers some advice to wrestlers on where to go from here.

How many bookings have you lost so far due to restrictions on gatherings because of the coronavirus?
I honestly stopped counting once it went into the double digits. At first it looked like it was only going to be just a few and in 24 hours I lost everything from the last week of March to at least May or June. And even those are not confirmed to go on anymore, due to the uncertainty of how and when the coronavirus will be able to be controlled.

Tell me about the day (or days) when things really started getting bad as far as your bookings being canceled. To say nothing of Wrestlemania week shows being canceled …
I'm used to cancellations or postponements, it's the nature of the entertainment business. One thing I never thought possible was Wrestlemania week bookings ever being canceled. Wrestlers and companies alike work year round to be able to showcase their skills and events during the biggest weekend of the year, and this is the first time that 100 percent of these shows are not taking place.

I'd been keeping up with the news and had just wrestled an event on March 9 and everything was fine. On March 12, I already had 5 cancellations starting the week of March 21. That's two weeks before the events in Tampa, so I already had a feeling more would be coming. By the end of that week all my events were canceled. I didn't know what to think at first since this was the first time I had such a rash of cancellations at once. My first real concern was what I was going to do to pay rent since my income is based solely on wrestling. I, like many of my friends, found myself in a real dilemma.

You've wrestled for a huge number of groups and feds across the country; in your expert opinion how bad is this for independent wrestling?
In Florida, things had been really busy and very exciting of late with so many new groups operating. It's really bad. Independent promotions are essentially small businesses that could potentially go out of business because of the money lost on building deposits, flight purchases, merchandise ordered and other number of things that go into putting on shows during the biggest wrestling weekend of the year. I don't want any company to close – the more places there are to work, the more places that wrestlers have a chance to hone their craft. There are far more wrestlers than wrestling companies and spots on rosters are limited. The fewer companies there are, the fewer shows there will be and the less people get to work. Companies that weren't running Wrestlemania week are also affected since they too had to cancel their events across the world due to the pandemic, and none have a real answer as to when they can run again. Independent wrestling, as of now, is at a standstill. There are a few shows running without fans (a la WWE and AEW) and streaming their events online, but the more the U.S. government cracks down on public gatherings, the less and less these events are going to be able to take place.

What sorts of things are you hearing from your colleagues?
It depends on who I talk to. Some friends work for the big TV wrestling companies and while they may not be wrestling, they are still able to collect a paycheck, which is fantastic for them. Other friends have day jobs that help support their wrestling that may or may not be going through the same thing independent wrestling companies are going through: closures, reduction in staff, being let go outright. It's a tough time for a lot of people. We are all trying to remain as positive as we can and ride out this storm. There is a lot of uncertainty but the only thing we can really do is take this day by day.

How far off is the next show you have booked?
So far, May 5. I've never had a wrestling break for such a long time. To be completely honest, none of us know when we are able to run shows again so I am not really optimistic about that date. Hopefully we can return to work sooner than later.

What do you do in the meantime as far as training and performing?
As of right now, I am just trying to keep busy. Physically and mentally. The wrestling school I help train at (Team 3D Academy-Florida) is closed, the gyms are all closed, it is recommended to not socialize in large groups for the time being – so I've been doing at-home workouts and filming wrestling-related content while I have the extra time. The one thing I implore to my fellow wrestlers is to use this time as wisely as possible: work out when you can, study, work on your promos and character work, etc. The wrestling world may have stopped, but once it's back running again there will be a ton of hungry wrestlers wanting to get back in the game and you don't want to be left behind.

Do you know if any groups are planning livestreams on Youtube or Facebook? How viable do you think that is?
There are a few so far and I commend them for them trying to bring some entertainment to the masses during this trying time. Some, like Freelance Wrestling, based out of Chicago, have had to stop since their local government has mandated a shelter-in-place order and I assume more states will end up doing the same thing soon. I don't know how viable these shows would have been monetarily, but I know most, if not all, streams were set up with donation links so the wrestlers that find themselves out of work can maybe make some money during these trying times.

Do you have a merchandise site up or anything where people can support you?
Absolutely. I have a T-shirt store at prowrestlingtees.com/serpentico. I also am selling signed 8-by-10s by emailing KingSerpentico@gmail.com and I will send them out as the post office hours permit.